SOUTH AFRICA VERSUS THE WORLD AT EFC 51 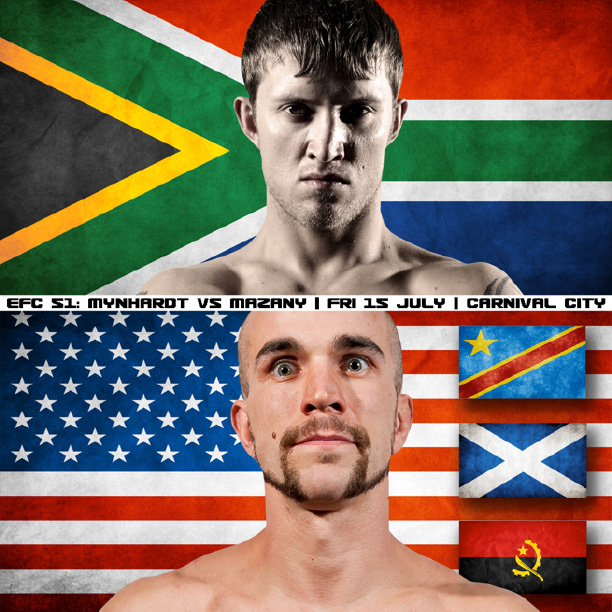 Johannesburg, South Africa – At the beginning of the year, EFC lightweight champion Leon ‘Iron Lion’ Mynhardt was set to defend his belt against American Dave ‘The Pain Train’ Mazany. However, Mazany was forced to withdraw for medical reasons and Mynhardt went on to face Boyd Allen in a close dream match-up that left fans reeling for more. Now is the time for Mazany to get his shot at glory against the dominant champ Mynhardt, when the world takes on South Africa’s best.

In the Co-main event of the evening, Carnival City will see the undefeated DRC born featherweight champion Igeu ‘Smiley’ Kabesa defend his belt for the first time since claiming it in a five round war with Scotsman Danny Henry. Now he faces a new challenge, one he has never faced before in EFC and MMA. Polokwane’s featherweight contender looks to make his claim for EFC gold for the first time. Both men are multiple wrestling champions, having represented South Africa in international competition and have had similar paths that lead them to MMA success. Now they face-off with the EFC championship on the line.

Plus, former featherweight champion, Scotland’s Danny Henry takes on South Africa’s Barend Nienaber in a bid towards divisional supremacy as both men are in search of a return to the top and a potential rematch against Kabesa hangs in the balance.

And a fight that fans and athletes alike have been clamoring for, two of the biggest smack-talkers in the organization, South Africa’s Gordon ‘Rage’ Roodman faces Angola’s Patrick ‘God of War’ Luindula in the opening bout of the main card broadcast live around the world. Luindula has been calling out Roodman for months on end and fans of both men have been demanding the bout take place.

All this and so much more with one more main card bout and the prelim card still to be announced soon.