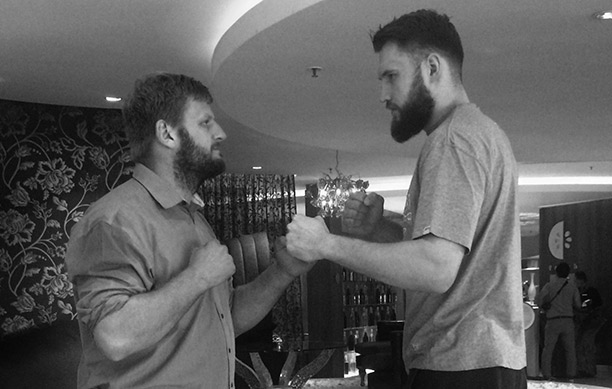 Johannesburg, South Africa – South African Andrew ‘One Gear’ van Zyl is known as a gentleman by fans and his opponents alike. He was also upset that he was not able to make it to the official EFC 49 Media Day at Carnival City last Saturday due to work commitments.

In an effort to make it up to fans that wanted to see the face-off, the former two-time heavyweight champion, van Zyl decided to visit his Polish opponent Tomasz ‘Kredka’ Kowalkowski at his hotel.

In a video just before facing-off with the Pole, van Zyl stated: “Hi EFC fans, I just rushed in here to face-off with Tomasz. I apologise for now for not being there, but come to EFC 49 on Friday, it is going to be amazing!”

See van Zyl and Kowalkowski and all the EFC 49 athletes make their final stand at the official EFC 49 weigh-in this Thursday at the Mardi Gras Theatre, Carnival City, 14:00.