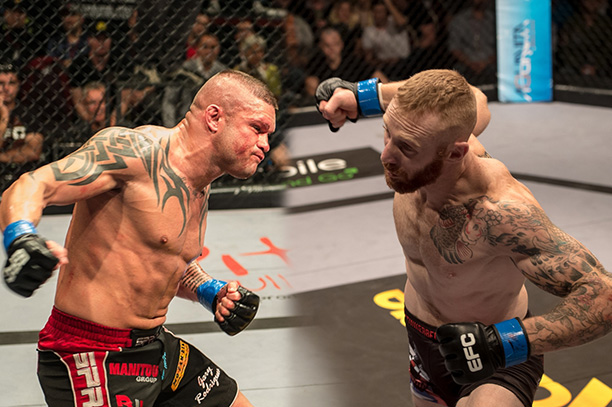 The ruthless Jeremy Smith who has been out of competition for some time was the only man to defeat UFC athlete Garreth McLellan in the EFC Hexagon and is now back, determined to make his stamp on the middleweight division. After changing camps, the dangerous forward fighter is training with the formidable Team CIT in Pretoria, a team who are sure to have honed his skills fiercely.

He faces an incredibly dangerous opponent in Springs’ Kruger. Fans saw a clinical striking display from the former contender in his title fight, one that could serve him well against the likes of Smith who is known for his heavy hands and brawling style. Fighting out of his own gym ‘House of Tinkerbell’ and under the guidance of Chris Bright, an ever improving Kruger can be expected to bring fireworks to the fight.

This fight takes place on the main card ahead of the lightweight title fight between South Africa’s Leon Mynhardt and America’s Dave Mazany. Get your tickets now from www.computicket.com to avoid disappointment.

EFC 51: Mynhardt vs Mazany, Kabesa vs Botha, presented by SUPABETS, takes place on Friday 15 July at Carnival City, Johannesburg. Tickets available at www.computicket.com, all the main card bouts will be broadcast live on kwesesports.com starting 20:00 (CAT) and delayed live on e.tv after the 20:30 (CAT) movie.