South Africa takes on the world at Carnival City in Johannesburg. 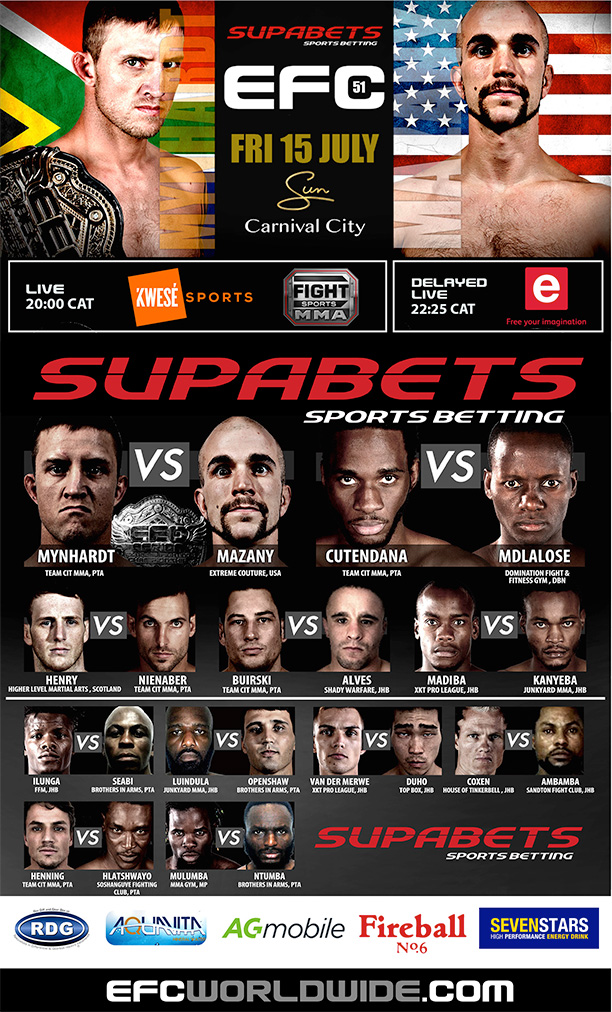 Johannnesburg, South Africa – The EFC lightweight champion Leon `Iron Lion` Mynhardt, representing South Africa, is set to defend his belt against America`s Dave `The Pain Train` Mazany. After defeating the inaugural EFC champion and remaining undefeated in the Hexagon, the Alaskan is but one step away from claiming what he believes is rightfully his, but Pretoria`s favourite son will do everything in his power to keep gold on African shores. Watch the countdown to Mynhardt vs. Mazany here: https://youtu.be/6DDOIxUDZjc

Angola`s Marino Cutendana looks to further his title challenger status when takes-on South Africa`s Baldwin Mdlalose in an official number one flyweight contender bout. Cutendana is on the hunt to become the second Angolan EFC champion. Watch the countdown to Cutendana vs. Mdlalose here: https://youtu.be/S-YHpPtb7FU

The former featherweight champion, Scotland`s Danny Henry faces South Africa`s Barend Nienaber in a bid towards divisional supremacy. Both men are in search of a return to the top and in search of a potential rematch with the champ.

All this and so much more with an action packed prelim card. Get to Carnival City to watch the entire event live!

Don’t miss a second of the action! Get to the events or watch them live via our broadcasters. Full broadcast and ticket information at efcworldwide.com.