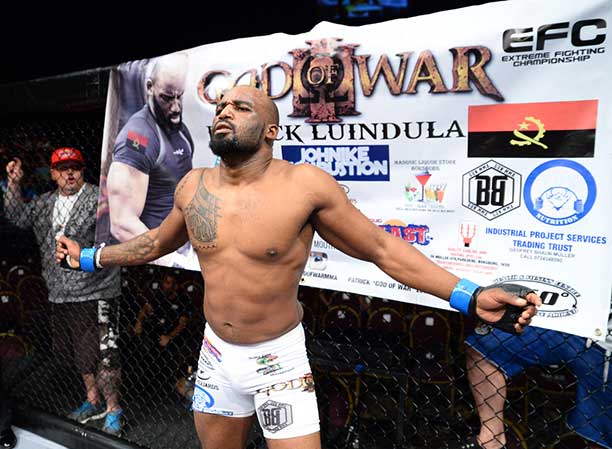 Johannnesburg, South Africa – One of the most outspoken athletes on the EFC roster, Angola’s Patrick ‘God of War’ Luindula is about to make his second appearance in the EFC Hexagon at EFC 51 and true to character, has started his prefight smack talk campaign once again. This time he has less words for Gordon Roodman and has rather verbally directed his point of view towards his upcoming opponent, South Africa’s Quaid Openshaw.

Undefeated in the Hexagon, Luindula made a big impact on fans with his out of ring antics and vocal bravado. Fighting out of Junkyard MMA in Boksburg, the ‘God of War’ is back at it again by referencing that his future opponent is, “simply an annoying obstacle in his journey up the EFC ranks.” He added, “he’s just another Joburg pot hole.”

Fighting out of Pretoria’s Brothers in Arms gym, Openshaw shares a victory over a mutual opponent with Luindula, Didier Nyembwe. Riding a two fight losing skid, a win over Luindula would propel Openshaw into the spotlight. At the time of writing, Openshaw had yet to respond.

See what the two middleweight competitors will have to say to each other when they face-off tomorrow at the media day.

This fight takes place on the prelim card ahead of the five fight main card headlined by the EFC lightweight title fight Leon Mynhardt vs Dave Mazany.