POWER VS MAD DOG FOR THE TITLE 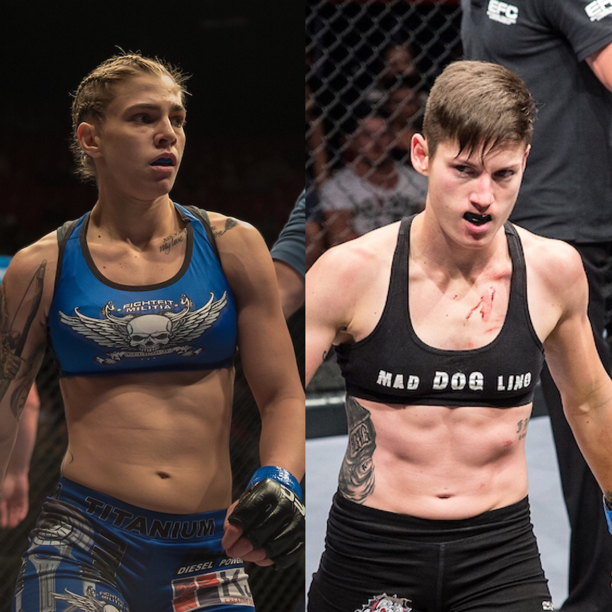 Sun City, South Africa – The women’s flyweight division first came to existence at EFC 37 over a year and a half ago, when South Africa’s Danella Eliasov took on Hungary’s Zita Varju in the historic first women’s bout inside the Hexagon. Since that day, the women’s division is one of the most watched in the organisation and has been heating up. The two biggest standouts in the division, Shana ‘Titanium’ Power and Amanda ‘Mad Dog’ Lino will go to war in Sun City to be named the women’s first EFC champion.

Power made her debut against England’s Kirsty Davis and finished the fight with a highlight reel spinning back-fist. She followed the stellar performance up with a clinical striking display against Italy’s Micol Di Segni. Undefeated, she is undoubtedly the top ceded athlete in the women’s division, with hopes of joining her many champion and former champion training partners at Johannesburg’s Fight Fit Militia in the history books.

Her opponent is none other than the KO queen, Amanda ‘Mad Dog’ Lino. Having finished two of her opponents with her blistering fast and heavy punches in the first round, she is a massive threat to everyone she stands opposite the Hexagon from. In her EFC debut, the former amateur world champion disposed of her Irish opponent Stephanie Quaile in just over a minute. Her second victory, saw her finish fellow South African ‘Demolition’ Jacqui Trosee in an explosive ten second TKO and cement her spot amongst the top of the competitive division.

The championship fight will take place on Saturday 15 October at the ultimate destination, Sun City. This massive bout features as the co-main event of the EFC 54 event where the heavyweight title fight between South Africa’s Danie van Heerden and Zimbabwe’s Elvis Moyo is scheduled. Full fight card and broadcast details to be announced soon on www.efcworldwide.com.

EFC 54: Van Heerden vs Moyo, Power vs Lino presented by SUPABETS, takes place on Saturday 15 October at Sun City, North West. Tickets available soon at www.computicket.com, all the main card bouts will be broadcast live on www.kwesesports.com starting 20:00 (CAT) and delayed live on e.tv after the 20:30 (CAT) movie.