Team UK have arrived in SA and are ready to set Carnival City alight! 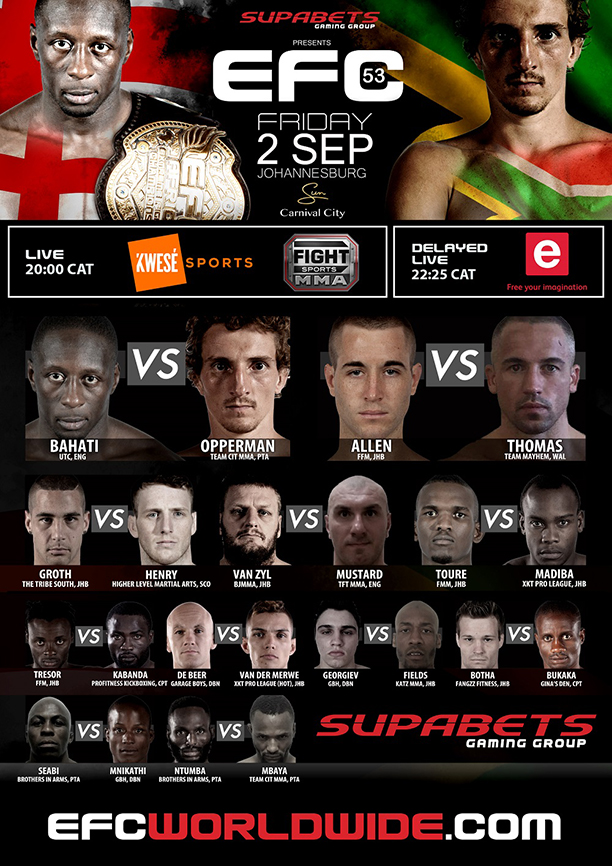 Johannesburg, South Africa – This Friday at Carnival City, two of the world`s best sports nations are set to collide in combat. South Africa`s most dangerous mixed martial artists are taking on the champion from the UK and more of the United Kingdom`s best.

Reigning middleweight champion, England’s Yannick Bahati was set to defend his championship against South Africa’s David Buirski when injury struck the challenger. Stepping up, sees his teammate and the former welterweight champion, Michiel Opperman. Watch the countdown to Bahati vs Opperman here: https://youtu.be/m9OVRd5A9Ds

Scotland`s Danny Henry, the former featherweight champion and the only man in EFC to ever defeat Boyd Allen has made his way back to RSA to face South African top contender contender and `Fight of the Night` maker Wade Groth.

All this and so much more ahead of the UK versus RSA main event. The upcoming night of fights sees a number of other high action, prelim and main card bouts between EFC’s best. Full fight card available at www.efcworldwide.com