Fight details ahead of the United Kingdom invading South Africa 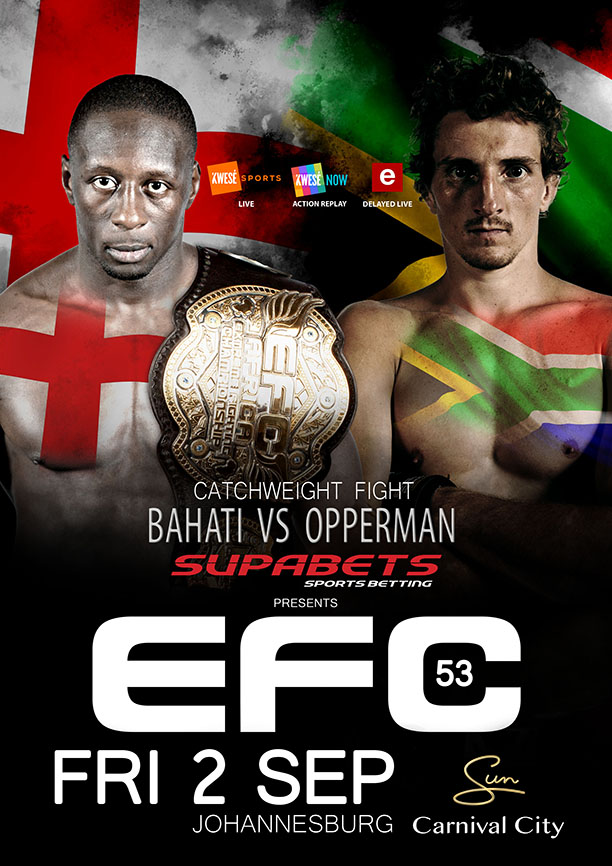 Johannesburg, South Africa – This past weekend it was announced that the former welterweight champion Michiel Opperman had stepped up on late notice to face England’s Yannick ‘Black Mamba’ Bahati in the main event at the upcoming EFC 53. He replaced his teammate David Buirski who was forced to withdraw due to injury.

The remainder of the upcoming main card, which sees the United Kingdom take on South Africa’s best, has recently been released. Details below.

Allen (RSA) vs. Thomas (UK) Azi ‘One Bomb’ Thomas hails from Colwyn Bay, Wales, where he trains out of Team Mayhem. With an impressive 6-2 professional record, he holds an even spread of submission and TKO victories, but it is his KO Power that he has become widely regarded for in Europe. Having represented Wales in boxing at the Commonwealth games, he faces a mammoth task in the form of the former featherweight champion, South Africa’s Boyd Allen. The fan favourite, bounced back from his title loss with a clinical victory over then lightweight champion Leon Mynhardt in a late replacement super fight. Now back on the hunt to reclaim EFC gold and continue building his legacy, Allen welcomes the new challenge in the heavier lightweight division where he remains undefeated.

Henry (UK) vs. Groth (RSA) Scotland’s Danny Henry wants the EFC belt back and is determined to get vengeance on the reigning champion Igeu Kabesa. But before obtaining his goals, the Scotsman has another difficult challenge which he needs to overcome. He faces South Africa’s Wade Groth, the former title contender and top prospect. Groth was last seen winning the ‘Fight of the Night’ at EFC 40 against Brendon Katz in a massive battle that put him right back on the MMA map. While Kabesa is set to defend his belt later this year, the next divisions contender is sure to arise out of this bout.

Van Zyl (RSA) vs. Mustard (UK) Tony ‘Oosh’ Mustard is an undefeated heavyweight fighting out of Sunderland, England. Having won all his fights via first round KOs and TKOs, Mustard brings a new threat to the biggest division in the organisation. He faces former two-time champion Andrew ‘One Gear’ van zyl. What happens when England’s heaviest hitter faces the iron jaw of South Africa’s van Zyl? Find out on 2 September.

Plus, set to open the main card sees two of the organisation’s greats, the undefeated Mamoudou ‘Frenchie’ Toure looks for his third straight win in a row when he faces the ever entertaining Tumisang ‘The President’ Madiba.

All this and so much more on the prelim card including.