Get to know the next heavyweight sensation 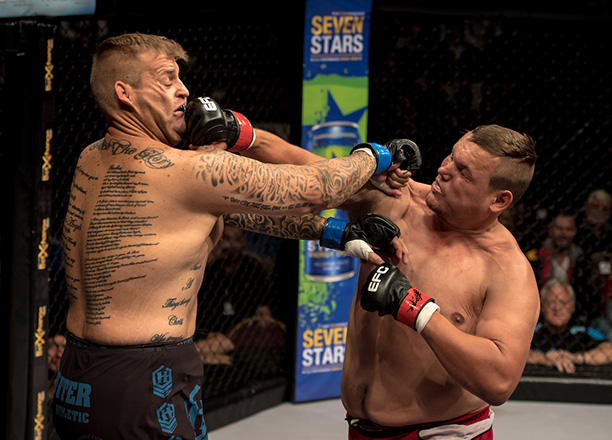 Wessel Mostert knocks out Wilhelm Strauss in his EFC debut at EFC 49.

Sun City, South Africa – One of the biggest rising stars in EFC is set to make his third appearance in the Hexagon next month. Wessel ‘Wess Express’ Mostert will make his debut on the main card when he faces knockout artist Ricky Misholas in Sun City.

Mostert is a former amateur world champion and has gone undefeated in all his amateur and professional fights. On top of never loosing, he has put away everyone he has faced. In an EFC exclusive, Mostert answered five quick questions to help fans get to know him better:

Why do you fight?

I fight because I believe MMA is the purest most realistic way of testing oneself. Mentally and physically our sport demands true grit, a characteristic I believe I have in abundance.

What do you do outside of fighting in the Hexagon?

I am the owner of Mosco Scaffolding (pty)Ltd. We do scaffolding projects/contracts/buy and sell scaffolding. It’s very demanding to be a business owner and a professional athlete, as we are currently doing work in Gauteng, Northern Cape, Freestate, Northwest and Lesotho. I have a great team at Mosco which allows me to still train at least twice a day. We are also game breeders on our farm close to Rustenburg.

What is your favourite technique?

I don’t have a specific favourite technique, BJJ is such a deep rabbit hole of skills which I really enjoy! In BJJ once you feel that you are starting to really improve, someone comes along and shows you how much more you have to learn, so I enjoy the ups and downs of the BJJ journey.

What are your goals in EFC?

My goal is obviously to become the Heavyweight champ, but at this stage I am focused on getting as much experience inside the hex as possible.

Why should fans watch you fight?

Although I am quite a big guy, I train to move like a lightweight. Nothing gives me more satisfaction than landing good clean combos preceded by great footwork. It’s something I train relentlessly and believe it also makes for entertaining moments

Mostert’s fight against Misholas takes place on the EFC 54 fight card where three EFC titles are on the line.