VAN ZYL VERSUS MOYO FOR GOLD IN SUN CITY 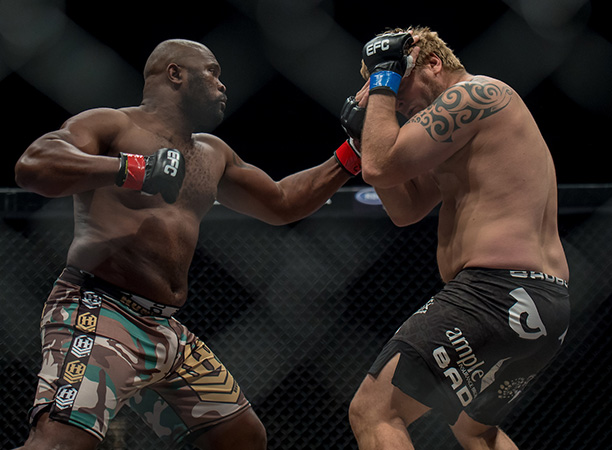 Sun City, South Africa – EFC 54 is just over four weeks out and the headlining heavyweight title fight has seen a massive change in lineup. The former champion Danie van Heerden was stripped of his title and suspended and now the former two-time champion Andrew ‘One Gear’ van Zyl has stepped in. He faces the number one contender and former African boxing champion Elvis ‘Bomber’ Moyo.

The two men first fought at EFC 31 in a fight that saw van Zyl leave as the victor. Now, over two years later ‘The Bomber’ not only has his shot at redemption but has his shot at the title.

The last time fans saw Moyo in action was at EFC 50 in Sun City where he fought in an exhilarating back-and-forth war of heavy-laden fists with ill intent against DRC’s knockout artist Ricky Misholas. The more disciplined and powerful athlete on the night, Moyo, out-boxed Misholas to claim a second round TKO win. Riding a two-fight streak of early finishes, Moyo looks to carry his winning momentum to claim EFC gold.

Van Zyl is a legend in the organization. He has captured the EFC championship twice, is a fan favourite and is one of the most experienced athletes on the roster. He is known for his gutsy performances and iron like jaw, being able to absorb every punch ever thrown at him, shake it off, and deliver his own heavy fists right back at his opponent. While he is known for his grappling acumen, it is van Zyl’s resilience and punching power that has brought him to victory so many times.

“This fight is going to be epic,” stated EFC President Cairo Howarth. He continued, “two giant men with KO power like few others have.”