GHOST WRITER ON THE HEAVYWEIGHTS 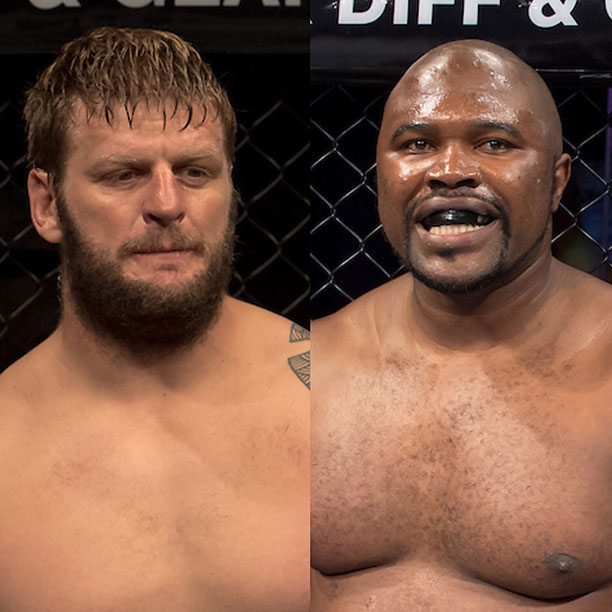 Sun City, South Africa – The anonymous EFC athlete and ghostwriter strikes again to give us his fight breakdown ahead of next Saturday’s EFC Sun City event, this is the professional’s perspective:

Andrew Van Zyl
Van Zyl is an old hat at this game. He was a dangerous guy long before the EFC was even dreamt of, and he is going from strength to strength. He has also held the gold twice before and I’m sure he is hungry for it again. Other fighters have left the EFC to compete overseas and they have had poor showings. I think if there is anybody who could be sent right now with an expectation of success, I’d say it is van Zyl.

On the feet he has shown much improved boxing skills over his last few outings, developing effective head movement. He has power in his hands and he mixes them up nicely, shifting his strikes to the openings he feels on his opponents.

He is calm and effective under pressure, with a high, tight guard and an iron jaw. His head movement may leave him exposed to Moyo’s right hand, which he has tasted and handled before. No man is invincible though, and if he eats too many of them, it won’t turn out well for him.

He has a strong clinch and good trip-takedowns. He is persistent with it, and his years of training and fighting have developed that particular kind of endurance necessary to grind away in the clinch. That sort of stuff doesn’t come quickly or easily, and I don’t know whether Moyo will be able to sustain the pace van Zyl can, in the clinch.

His ground game is definitely one of his strongest assets. He is unusually fast and fluid, especially for a heavyweight. He is comfortable and capable on top and on the bottom. He has good strikes on the ground and good submissions. He has been caught with fast submissions before (his only losses), but they were all by more experienced grapplers than Moyo.

Elvis Moyo
Moyo is an African boxing champion, and a very experienced campaigner. That boxing skill serves him well in the Hexagon.

He plays a basic and effective boxing game built around using jabs, hook cross combos, and right hands to the body. What makes it effective is his ability to execute with excellent timing and very good speed for a heavyweight.

He does some of his best work under pressure. Interestingly, he himself doesn’t seek to engage that pressure, rather playing a longer game and trying to catch his opponent coming in. That will make takedown defence easier.

He also tends to disengage after the first rally, retreating out of range and letting his opponent off the hook.

He shows good instinct to know when an opponent has mentally collapsed, and applies pressure well, mixing in body shots and quick strikes until the ref steps in.

His clinching and grappling ability is improving, and he shows good endurance and solid power. It still looks relatively shallow at this stage though, especially compared to a guy like van Zyl, who has already submitted him with relative ease once before.

Moyo will need to keep this fight off the ground to take victory. Van Zyl typically doesn’t shoot, opting instead for clinch takedowns. If Moyo can keep him at arm’s length and unload with a few good uppercuts, we may see him taking the victory.

CONCLUSION
Neither fighter uses kicks much, and neither has a particularly devastating clinch-striking game. This will most likely be a boxing match, where Moyo will most likely have a clear advantage, until (if) van Zyl can score a takedown.

The way Moyo breaks off desperately from the clinch, may leave him exposed to them; assuming he can successfully defend the first layer of van Zyl’s clinch attack.

If van Zyl can score the takedown, Moyo will be in a lot of trouble and will need to get back to his feet as soon as possible while avoiding van Zyl’s dangerous submissions. Van Zyl has a very fast and very dangerous ground game, especially for a heavyweight. Moyo has been training with Wiekus Swart though, who is also a big, strong, very skilled heavyweight so it’s entirely possible he will be prepared and capable to fend off the ground attacks.

Moyo’s best shot at victory is a KO. Andy has never been KO’ed (and I don’t think he’s ever been wobbled), and Moyo doesn’t seem to have one-punch KO power. He’d have to keep this fight standing for the majority of the 25 minutes while scoring with buckets of effective punches and fending off van Zyl’s takedowns and striking. That’s a tall order, but that’s what champions are made of.