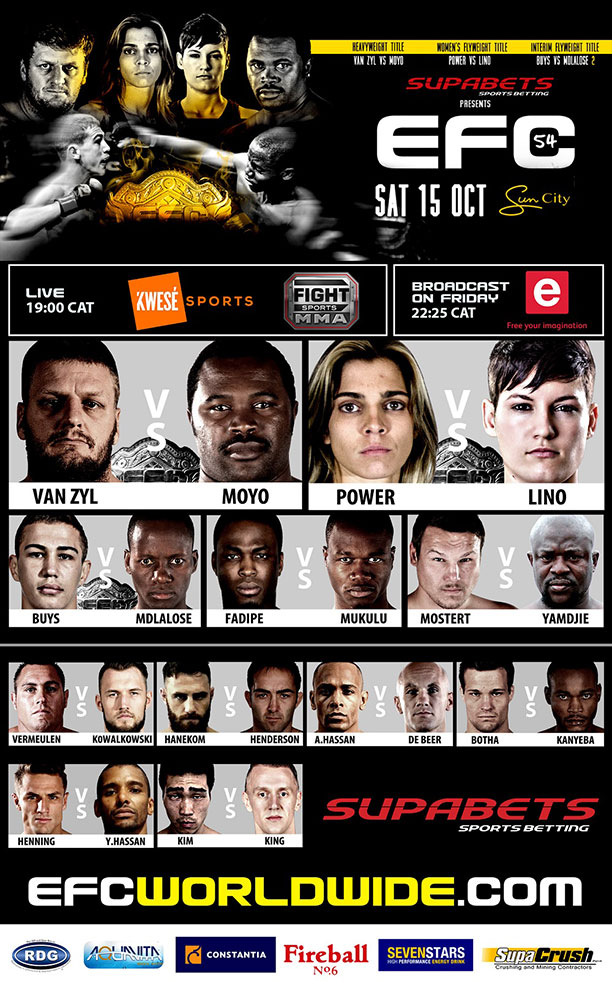 Sun City, South Africa – Former two-time champion Andrew ‘One Gear’ van Zyl steps in on late-notice to take on the Zimbabwean `Bomber` Elvis Moyo for the vacant EFC heavyweight championship. A massive rematch with so much at stake. Watch the countdown to van Zyl vs Moyo: https://youtu.be/WLnjxfjgajA

Plus, in the women`s division, Johannesburg`s undefeated Shana ‘Titanium’ Power takes-on Durban`s destructive Amanda ‘Mad Dog’ Lino for the inaugural women`s flyweight championship. The `Titanium` tactician looks to continue her unbeaten record as she goes up against the wrecking machine of `Mad Dog`. History will be made when the first EFC women’s champion is crowned. Watch the countdown to Power vs Lino: https://youtu.be/E2dpxYhQY4o

And, Johannesburg’s JP Buys, a man determined on revenge, takes-on his only ever loss, Durban`s Baldwin Mdlalose. This time with the interim flyweight championship on the line. Watch the countdown to Buys vs Mdlalose: https://youtu.be/FZRJoPTNv6U

But, just ahead of the three title fights sees the return of the former welterweight champion, the Irish Nigerian Henry Fadipe. A man hell bent on reclaiming his EFC belt. The only man willing to enter the Hexagon to face Fadipe is DRC’s Bruno ‘The Major’ Mukulu, and a war is what Mukulu wants to bring.

Don’t miss a second of the action! Get to the events or watch them live via our broadcasters. Broadcast and ticket information at www.efcworldwide.com.