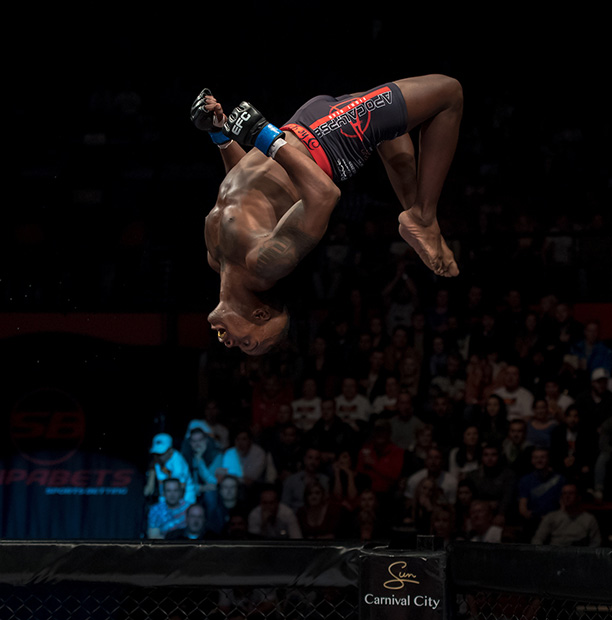 Tumisang Madiba performs one his famous backflips at EFC 51.

Sun City, South Africa – Yesterday, it was announced that Pierre Botha had withdrawn from his bout with Anicet Kanyeba scheduled for this Saturday in Sun City. With only a few days to go until the event, an opponent was needed to face the DRC star, Kanyeba. One man answered the call, a man that has faced him before; fan favourite Tumisang ‘The President’ Madiba.

As soon as it was announced that Botha had withdrawn from the fight, Madiba posted on social media, calling for the rematch.

“He doesn’t need an opponent… he needs to stop ducking one! I stay ready! Anicet, let’s GO! I can make 66kg this Friday,” stated Madiba on Instagram.

Madiba and Kanyeba faced each other at EFC 51 on the main card in an exciting back and forth battle. Early in the second round, Kanyeba sustained an eye-poke and was unable to continue, forcing the fight to be ruled a ‘No Contest’.

Madiba is currently riding a two-fight win streak, while Kanyeba is on massive four-fight winning streak. A win for either man would bring them supremely close to the top of the division.

“This is a fight we have wanted to put on for some time,” stated EFC matchmaker Graeme Cartmell. The last time they met, it was epic; but now we will actually get to see who the winner will be. Both Madiba and Kanyeba thrive on these short notice fights and always bring an exciting war.

This fight takes place on the prelim card ahead of the three title fight main card at Sun City this Saturday.