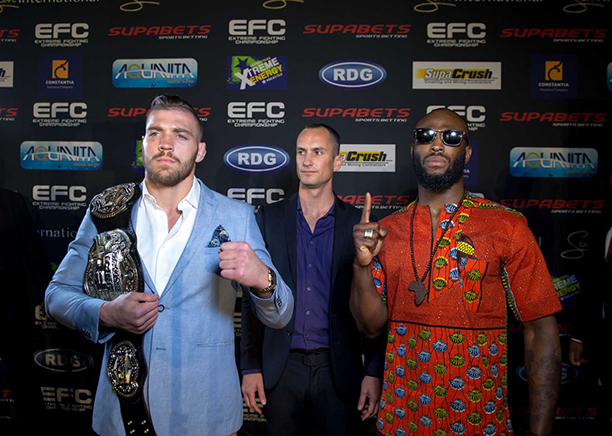 Johannesburg, South Africa – It is confirmed, Dricus ‘Still Knocks’ du Plessis will make his first welterweight title defence. The South African fighting sensation faces the former champion, Ireland’s Henry ‘Herculeez’ Fadipe at Carnival City on 9 December. What was an already stacked card with two title fights just got bigger! The welterweight championship will now headline the stacked card which now has three title fights taking place, and it is sure to cap off an incredible year of EFC events in style.

Du Plessis captured the welterweight championship when he submitted the highly experienced Martin van Staden. He has said that he only wants the toughest and biggest opponents and that he only sees two athletes worthy of contesting for the belt, Cameron Pritchard and Henry Fadipe. Pritchard is still to compete in Cape Town later this year and if he wins will get a shot at the welterweight strap.

A former welterweight champion, Fadipe made an epic return to the Hexagon last weekend when he dominated DRC’s Bruno Mukulu for nearly three rounds. The Irish based Nigerian has finished almost all his opponents with is devastating power and accuracy. Fadipe has never come close to being finished and has only ever lost once inside the Hexagon; on points after being out wrestled by Speechly for 5 rounds. Fadipe is a true contender and currently possesses the greatest challenge to the young champion.

This fight takes place as the main event after two exciting title fights, which sees both the featherweight and middleweight championships on the line. Middleweight king Yannick Bahati faces David Buirski and the undefeated champion Igeu Kabesa meets his match, Hanru Botha. A monstrous fight card, to cap off an incredible year of fights for the organisation.