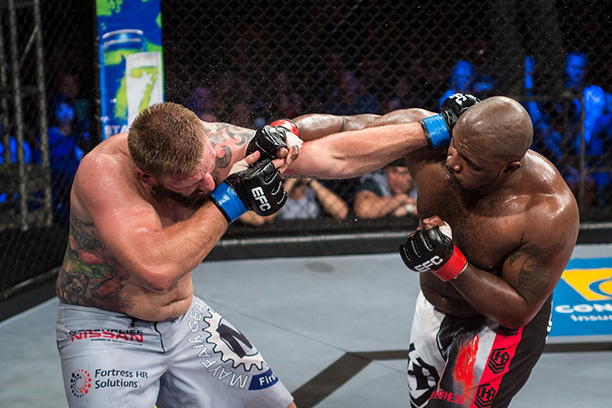 Sun City, South Africa – In what may be remembered as the greatest turnaround in EFC history, Andrew van Zyl rallied from some remarkable punishment at the hands of Elvis Moyo to reclaim the Heavyweight title for a record third time.

Playing out to a vociferous capacity crowd at Sun City, the heavyweights put on a main event worthy of the spectacular venue. Moyo took the fight to van Zyl for three rounds, displaying superb striking and movement. A clearly battered van Zyl managed to get top control early in the fourth and rain down vicious elbows to claim the TKO victory. Speaking at the post fight press conference, van Zyl categorically confirmed that was the hardest fight of his veteran career. A philosophical Moyo simply told the crowd, “The best is yet to come…” after delivering his most rounded MMA performance to date.

The co-main event of the evening saw more history being made as JP Buys quickly disposed of Baldwin Mdlalose to become the youngest EFC champion ever. After an initial barrage from the Durbanite, Buys managed to manipulate from the clinch into an air tight arm triangle to take the victory by submission. Buys must now wait to hear his fate, as the potential of a unification bout with Nkazimulo Zulu looms.

Henry Fadipe made his long awaited return to the EFC hexagon after a two-year absence against Bruno Mukulu. In a tepid affair, Mukulu was eventually disqualified for not engaging after fielding several warnings from referee Wiekus Swart, though Fadipe was clearly ahead in the fight in any case. Fadipe now faces a much sterner challenge in prodigious champion Dricus du Plessis for the Welterweight belt in December.

Two heavyweight fights opened up the main card, which saw Mike Vermeulen and Wessel Mostert secure victories in front of their hometown fans. Vermeulen claimed his fourth victory on the trot by beating Polish giant Tomasz Kowalkowski with a slick guillotine. Mostert’s size and power proved too much for late replacement and debutant Nico Yamdjie as he won via TKO.

Fight of the Night was awarded to the heavyweight title fight between Andrew van Zyl and Elvis Moyo. Performance bonuses were awarded to Tjaart Henning and Yusuf Hassan.

Up next EFC 55: Pena vs Sayed, Mazany vs Madge presented by SUPABETS, takes place on Friday 11 November 2016 at GrandWest, Cape Town. Tickets are on sale now at www.computicket.com, and the 5 main card bouts will be broadcast live on kwesesports.com (Sub-Saharan Africa) and Kwesé Free Sports (Kenya) starting at 20:00 (CAT) and delayed live e.tv (South Africa after the 20:30 (CAT) movie. Full broadcast details available on www.efcworldwide.com.