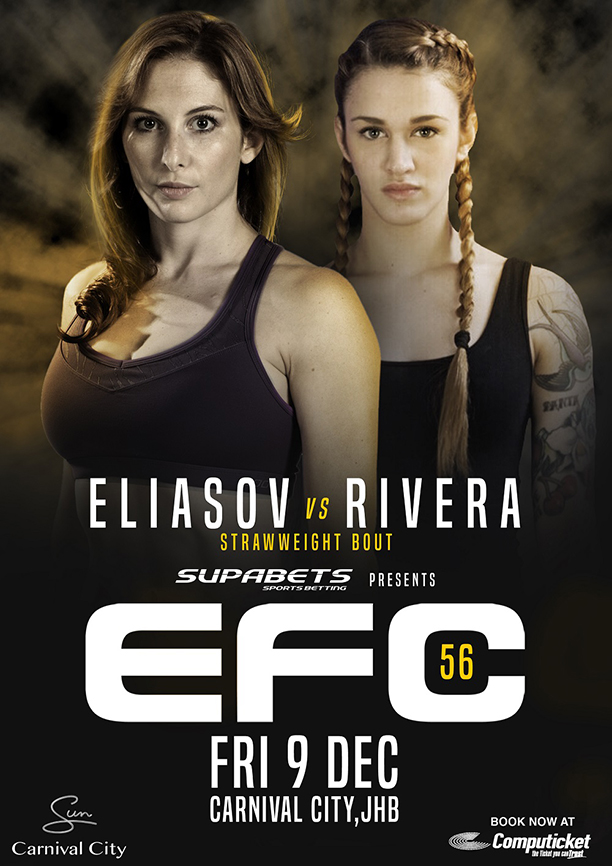 Johannesburg, South Africa – Danella Eliasov made history as the first South African female to compete inside the EFC Hexagon. She first fought at flyweight and now is set to make history again, this time as a pioneer in the women’s strawweight division. On Friday 9 December in Johannesburg, Eliasov will face a new and highly experienced EFC signing, Spain’s Irene ‘La Nina’ Rivera.

Rivera is the organisation’s first Spanish signing and continues to bolster the growing European roster. ‘The Ultimate Fighter’ Season 23 contestant fights out of Templum Barcelona in Barcenlona, Spain and carries an impressive 6 professional wins behind her name. She is a tall strawweight with a slender frame who often towers over her opponents. All but one of her victories has come by way of submission and she has a one hundred percent finish rate.

“This lady is an absolute machine, I feel a bit sorry for anyone in her division.” EFC matchmaker Graeme Cartmell said when asked for comment. He added “I can’t wait to meet her, I hope she makes it here for the media day.”

South Africa’s Eliasov is no stranger to international MMA competition. The psychiatrist who has only ever competed against European opponents is known for her slick Brazilian Jiu-Jitsu skills.

Eliasov used to compete at 57kg and is now set to compete at 52kg. She expressed a strong desire to compete in the lighter strawweight division since joining the organistaion and now finally gets the chance. An evolved fighter remains to be seen, however it is clear that between her last bout and her next, a lot will have changed. The Johannesburg favourite has moved to Pretoria’s Team CIT where she has been working alongside champions and former champions such as Dricus du Plessis, Leon Mynhardt and Adam Speechly.

“Strawweight is a much better division for me and closer to my natural weight. I was too small to be fighting at fly as I was walking around well under the 57kg weight limit,” explained Eliasov when asked about her change to the lighter category.

Eliasov also commented on her upcoming opponent, “I am so excited to be getting back in the Hexagon after struggling to get a fight after so long.” She continued, “Irene is a very experienced and well-rounded fighter with 9 pro fights. However, I am training at the best camp in the country with world class teammates and coaches. I am confident that my team have equipped me with the skills to beat Irene despite her level of experience.”

The opening of the new weight division is sure to attract many more competitors and it is a division that the organization is very excited about.

“It had to happen, we have to build divisions that suite the athletes and there was a massive calling for something lower than flyweight,” stated Cartmell. He continued, “Not to mention this is a highly competitive division globally so we are in for some amazing talent gracing the EFC Hexagon.”

Eliasov versus Rivera takes place on the prelim card of EFC 56 ahead of the five fight main card headlined by two championship bouts and a mega middleweight matchup.