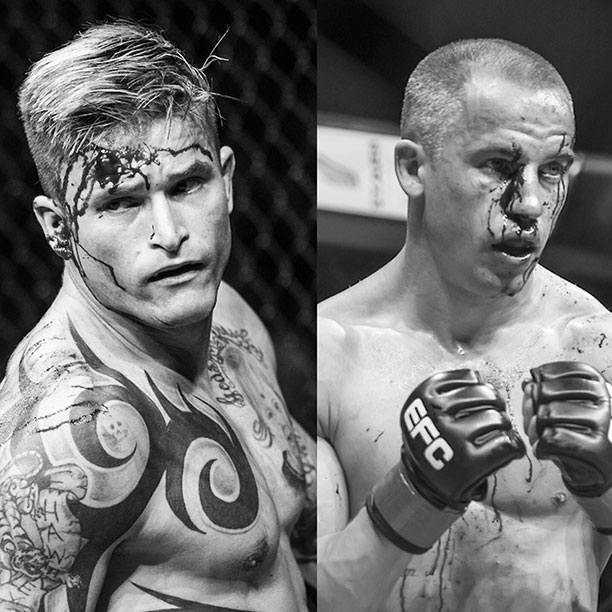 Cape Town, South Africa – As Leon Mynhardt accepted EFC 55‘s last minute fight against Dave Mazany he knew he was taking a risk. Not only did he know that he was facing the risks involved in an imminent fight with Mazany, but also the dangers of sustaining an injury in the process. If he sustained an injury it would prevent him from competing in his scheduled matchup against Azi ‘One Bomb’ Thomas in December. Unfortunately for Mynhardt, that is exactly what happened.

During the title fight rematch, which turned out to be an epic battle earning ‘fight of the night’ bonuses for both athletes, the South African who stepped up on very short notice sustained multiple facial lacerations. Fans based in Africa can view the bout and the entire EFC 55 main event at kwesesports.com or on the kwesé app.

The injuries unfortunately forced Mynhardt to withdraw from his bout against Thomas and the question: Who would face the Welshman at Carnival City in December? Began to be asked.

While many top contenders offered themselves, including the explosive Tumisang Madiba, it is one brash former contender from Durban that has been given the dangerous Welshman. Needing little introduction enters Wesley ‘Young Assassin’ Hawkey.

Thomas has been antagonizing potential South African opponents since the news of broke of his Mynhardt’s withdrawal:

Hawkey, fresh off a first round KO over Brendan Katz and a first round victory against Sibusiso Mdoko in Cape Town, immediately called out the other ‘Brits’ in his division during a post fight statement by saying that they are exactly who he wants to fight next.

“I have been handing out hidings to all the local boys and I want to show I can beat these Europeans that think they are so great,” Hawkey followed on to say in an interview.

Hawkey sees Thomas as the ultimate proving ground to show his striking skill set. “Azi dropped Boyd, not many can even lay a hand on him, never mind drop him. I know my striking is way better than that, so now I will show I am one of the best in the world when I give him his second beating in Carnival City.”

With no sign of injury and always eager to get in a fight, Hawkey is ready to end off the year on a very high note, he concluded the interview with, “Sibusiso was a good warm up, now to collect another scalp.”

This fight between Thomas and Hawkey will take place on the main card at EFC 56 just ahead of the three title fights that headline the final event of the year.