MADGE OUT, ‘IRON LION’ COMING TO RECLAIM GOLD FROM MAZANY 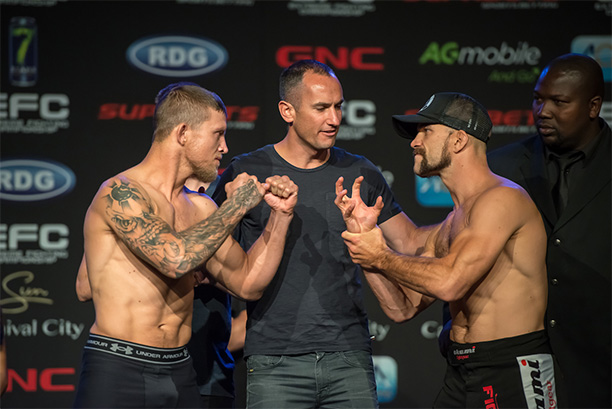 Cape Town, South Africa – Early yesterday morning, EFC HQ received word from Don ‘Magic Man’ Madge’s team that he was injured in training. Madge has withdrawn from his scheduled title fight against Dave ‘Pain Train’ Mazany next Friday. With only one week to go to EFC Cape Town, one man answered the call, one man that seeks redemption. That man is Leon ‘Iron Lion’ Mynhardt.

Mazany and Mynhardt first clashed at EFC 51, where Mazany stunned Carnival City with his first-round submission finish over Mynhardt. They will now rematch in the co-main event at GrandWest next Friday.

A fan favourite for his multitude of wars, the ‘Iron Lion’ was the reigning lightweight champion for over two years where he successfully defended the belt four-times. “When I received the news about Don,” explained Cartmell. He continued, “My immediate first thought of a replacement was Leon. He was such a dominant champion for so long and deserves a shot at redemption. He is also deep in his training camp for Azi Thomas in December, so he is fit and ready to throw down.”

Already in preparation for a featherweight bout in December, Mynhardt relished at the opportunity to reclaim the belt and once again sit atop the lightweight throne.

“I was so glad when I got the call, now to get my belt back,” stated Mynhardt

This fight takes place on the main card at EFC 55 in Cape Town. Just ahead of the bantamweight unification title fight between Demarte Pena and Irshaad Sayed.