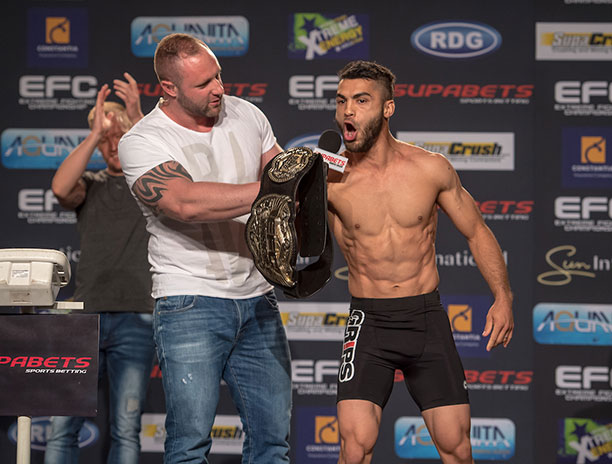 Cape Town, South Africa – Irshaad ‘White Tiger’ Sayed says he has a “kill switch” that Demarte ‘The Wolf’ Pena lacks and insists the Angolan will have no room for error in their bantamweight championship unification bout in Cape Town on Friday night.

Sayed (12-2) aims to become the first man to finish Pena (11-0) inside the Hexagon but insists he will fight smart against the durable Angolan.

“I have the ability to finish the fight soon but I won’t be chasing the knockout,” said the decorated Muay Thai specialist, who claimed the interim belt with a third-round TKO of Cedric Doyle at the same venue in April.

“I’ll allow it to come, I’ll put together my combinations and when I catch him with something and I see an opportunity I will jump all over it. That kill switch that he doesn’t have, I have that kill switch. As soon as I see a bit of blood or I see a small opportunity I‘m going to drive through and capitalise on the opportunity.

“At the end of the day it is not a wrestling match. I’m going to strike and move and for him to wrestle he has to get hands on and I won’t allow him to get hands on. I do also mix things up. Cedric Doyle was a self-proclaimed wrestler and I took him down a couple of times. Demarte took him down as well, but Demarte didn’t manage to hold him down. I took Cedric down, I held him down, I worked my ground and pound.

“I think people underestimate my grappling skills and my wrestling skills because of my extensive Muay Thai background. But people should stop looking at me as a Muay Thai fighter, but should start respecting me as a well-rounded, MMA fighter.”

The 27-year-old also dismissed much of Pena’s utterances leading up to the duel as paying “lip service”.

“He said a lot of stuff that I feel he can’t live up to. I haven’t said anything that I can’t accomplish. I said I have better striking and I know that and I believe that. He said that but I think it’s just lip service. I’m definitely on the night going to look to finish the fight, whereas everybody knows Demarte comes out and tries to lay and pray. So, it’s going to be an exciting night and I’m looking forward to it.”