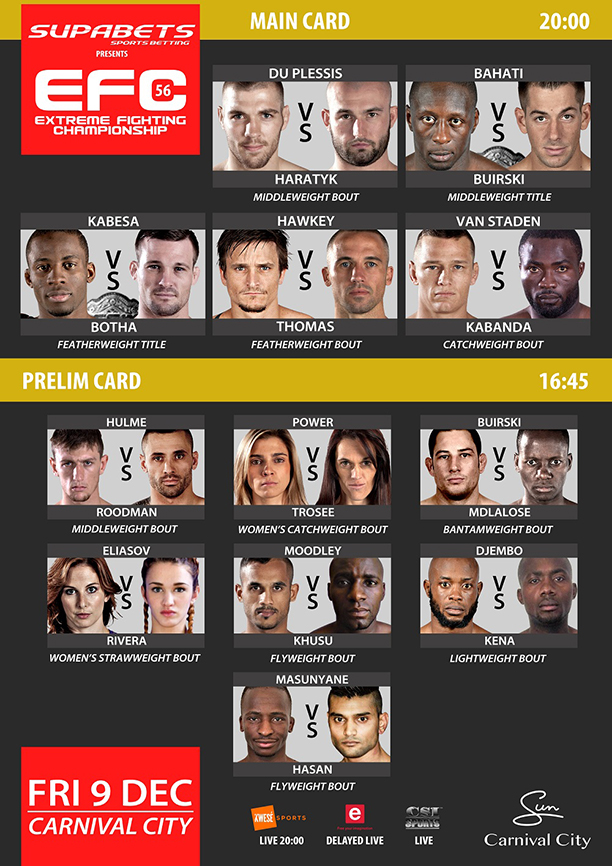 Johannesburg, South Africa – This Friday sees welterweight champion, South Africa’s Dricus ‘Stillknocks’ du Plessis in the biggest fight of his career as he takes on top middleweight contender, Poland’s Rafal ‘Polish Tank’ Haratyk. Two of the most dominant athletes in different weight divisions will collide for a mega matchup as du Plessis looks to create his legacy as the best athlete in the organisation and Haratyk aims to prove his position at the top of the middleweights. Watch the countdown to du Plessis vs Hartyk: https://youtu.be/5reYwKqag1Y

On the same night, the middleweight title is at stake when champion, England’s Yannick ‘Black Mamba’ Bahati defends against former welterweight champion, South Africa’s David Buirski. The South African looks to make history yet again by claiming his second title in a second division, but standing in his way is an angry behemoth of a champion, a man that is in search of vengeance and redemption. Watch the countdown to Bahati vs Buirski: https://youtu.be/cZRfovdCxvA

Plus, undefeated featherweight champion Igeu ‘Smiley’ Kabesa put his unbeaten record and title on the line when he faces notorious KO artist and champion wrestler, Hanru Botha. While Kabesa has breezed through all his opposition to date, Botha is seen to be his biggest threat yet. With the power to knock out anyone and wrestling skills to match the champion, Kabesa’s agility and heart will be put to the test. Watch the countdown to Kabesa vs Botha: https://youtu.be/XpvPijpSv_E

Added to this, a star-studded prelim card featuring highly anticipated matchups including Mark Hulme vs Gordon Roodman, Shana Power vs Jacqui Trosee and the inaugural women’s strawweight bout between South Africa’s Danella Eliasov and Spain’s Irene Rivera and so much more.