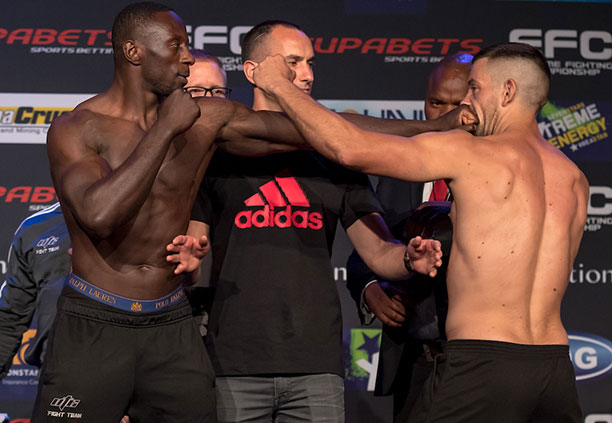 Headed by a phenomenal three champions entering the Hexagon, two to defend titles and one to take on the might of a higher division, EFC has crafted a fight card packed with iconic athletes from start to finish.

Welterweight champion Dricus ‘Stillknocks’ du Plessis (RSA) travels up to middleweight to take on the undefeated power of Rafael ‘Polish Tank’ Haratyk (Poland). Du Plessis is taking a gamble pitting himself against the bigger man, as well as making a calculated move. Should he win he takes another step toward total EFC domination, with two divisions becoming his playground.

Champion Yannick ‘Black Mamba’ Bahati (UK) faces David Buirski (RSA) for the middleweight title. This fight already has a war of words behind it, and the animosity showed. Bahati and Buirski pushed their fists into each other’s faces and later the tension erupted backstage. As Du Plessis and Buirski fight out of the same camp the champion was drawn in, creating a massive knot of tension in the top two fights.

“I see myself putting him away early, then I’m coming for the rest of South Africa,” stated Bahati to the crowd.

“Bet you he’s gonna shoot, and catch an uppercut in the process,” replied a quietly grinning Buirski.

It was Haratyk that stayed cool and calm outside of the action, saying, “I respect him (Du Plessis), but he has not yet felt my power. The Polish tank is fully loaded.”

The animosity that runs through tomorrow night’s top two bouts is as real as it gets, expect thundering finishes.

Featherweight champion Igeu ‘Smiley’ Kabesa (DRC) defends his title against Hanru ‘The Bully’ Botha (RSA). Between them they are the most decorated wrestlers in the organisation, with Botha preparing to compete at Olympic level. Tomorrow the king of the wrestlers will be revealed, baring in mind both have the frightening ability to knock their opponents out cold.

“I’m going to defend my belt, and then go home and hug it,” said the champion Kabesa, giving the crowd his trademark smile.

“It’s going to be an interesting fight,” agreed Botha.

Boxing comes to the forefront when Wesley ‘The Young Assassin’ Hawkey (RSA) takes on Azi ‘One Bomb’ Thomas (Wales). They are brutal craftsmen with their fists and footwork, and they loved the chance to stand face-to-face and start their war with words.

Martin ‘The Punisher’ van Staden (RSA) returns to the Hexagon in the evening’s main card opener. After forging his notoriously heavy hands in the welterweight ranks he has dropped to lightweight for the first time, where he meets Kaleka “Block’ Kabanda (DRC). Van Staden was fired up, bringing huge size after what seemed an easy weight cut.

The official EFC 56 weigh-in results are as follows: