TICKETS TO KABESA VS ALLEN ARE OPEN

Get yours now to avoid disappointment! 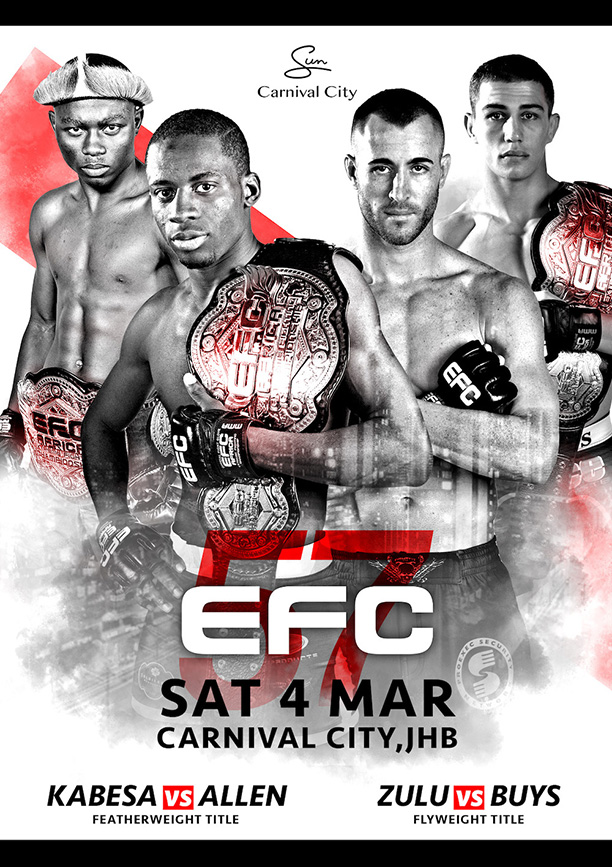 Johannesburg, South Africa – The undefeated featherweight champion faces the biggest threat to his career. Set to be standing across from the DRC dynamo is one of the most formidable athletes ever to have stepped in the Hexagon. On Saturday 4 March at Carnival City the wrestling sensation turned MMA superstar, Igeu Kabesa goes head-to-head with his former teammate and the former champion, the ultimate fighting machine, Boyd Allen. For years, the two did battle in training, but after parting ways at the end of 2016, the time has come for them to meet again.

Co-headlining the main event, sees the reigning flyweight champion, Nkazimulu Zulu make his return from the ‘The Ultimate Fighter’ tournament for his first title defence as he takes-on the interim champion, JP Buys in what is sure to be a high paced action packed bout that will unify the divisions belt.

Tickets for the first event of 2017 are on sale from Computicket now: http://bit.ly/2juU3IY

EFC 57: Kabesa vs Allen, Zulu vs Buys on Saturday 4 March 2017 at Carnival City, Johannesburg. Tickets are on sale at www.computicket.com, and the 5 main card bouts will be broadcast live on kwesesports.com(Sub-Saharan Africa), Kwesé Free Sports (Kenya & Rwanda) and live in South Africa on SABC 3 starting at 21:00 (CAT). Full broadcast details available on www.efcworldwide.com.