DOUBLE DOSE OF EFC EVERY WEEK 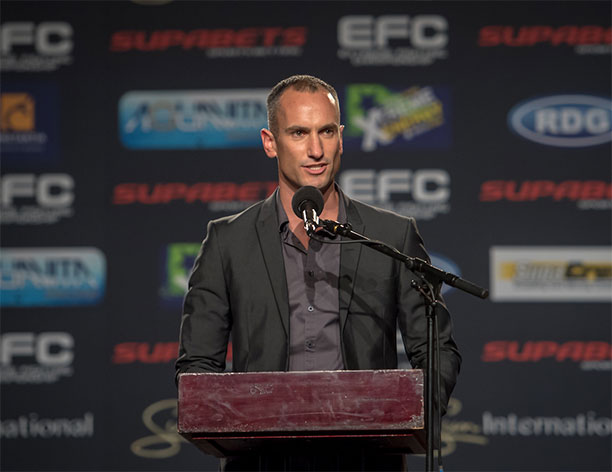 Johannesburg, South Africa History was made this past Saturday night as the inaugural EFC broadcast took place on SABC 3, which is now followed by a repeat broadcast on Monday afternoon.

Fans celebrate online at watching their favourite EFC heroes in action on SABC 3.

“We wanted to give all the new SABC viewers a taste of what EFC is about, with some of the most exciting fights in recent times and a cross section of some of our biggest personalities,” explained EFC President Cairo Howarth. “Many of the athletes featured in the fights broadcast are also competing in upcoming events.”

EFC viewership on SABC 3 is likely to be in the millions, attracting more fans to the sport.

“This is fantastic! SABC Sport gives EFC partners and athletes massive exposure to millions of fans around South Africa,” stated Howarth. He continued, “This, added to the worldwide promotion on numerous international TV networks, cements EFC as one of the most watched sport properties on the continent and one of the most watched MMA organisations in the world.”

EFC episodes of past fights are broadcast on SABC 3, every Saturday night at 21:00 (CAT) and followed by a repeat on Monday afternoons’ at 14:00 (CAT). Don’t miss the next exciting episode featuring Henry Fadipe vs Dino Bagattin, Dricus du Plessis vs Martin van Staden, Danny Henry vs Wade Groth, Conrad Seabi vs Sizwe Mnikathi, Yannick Bahati vs Michiel Opperman.

All eyes now turn to EFC 57: Kabesa vs Henry, presented by BetXchange.com on Saturday 4 March 2017 at Carnival City, Johannesburg. Tickets are on sale soon at www.computicket.com, and the 5 main card bouts will be broadcast live on kwesesports.com (Sub-Saharan Africa), Kwesé Free Sports (Kenya & Rwanda) and live in South Africa on SABC 3 starting at 21:00 (CAT). Full broadcast details available on www.efcworldwide.com.