CONTROVERSY AFTER INTERVIEW ON ‘THE CLINCH’ 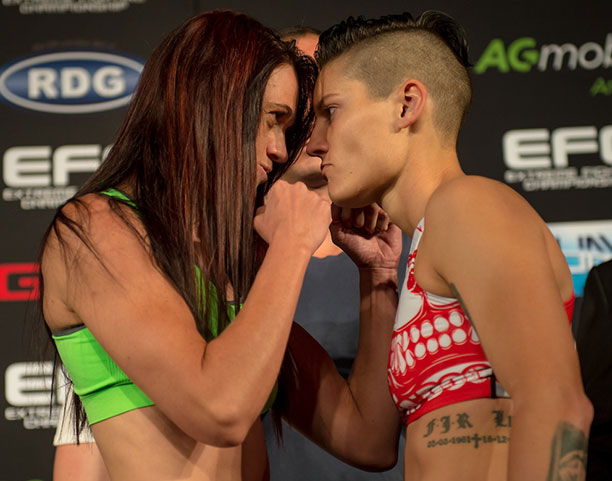 Johannesburg, South Africa – Just revealed on eNCA’s ‘The Clinch’ by EFC matchmaker Graeme Cartmell, the vacant women’s flyweight title will be up for contention between Durban’s Amanda ‘Mad Dog’ Lino and Pretoria’s ‘Demolition’ Jacqui Trosee. Added to this mega announcement, some controversial news was revealed.

The interview with Cartmell hosted by Simon Stephens, can be watched here – http://www.enca.com/sport/the-clinch-episode-7-efc-57

It began with the reviewing of the epic EFC 57 event that recently took place at Carnival City. It then moved onto future bouts planned for EFC. The following are the most notable points from the interview:

Amanda Lino will face Jacqualine Trosee as the main event at EFC 60 in Durban. This fight will make history on several plains. Most notably, EFC will crown its first women’s champion and it will be the first time that females are headlining an event. Added to this, EFC makes its long awaited return to the sunny shores of Durban.

It was announced that Chad Hanekom would step up to challenge Champion Dalcha for the light heavyweight championship at EFC 61 in Sun City. However, as soon as the interview was published, Hanekom contacted EFC to notify the organisation that he has withdrawn from the bout. More details to follow soon.

The interview then turned its attention on the much-anticipated Yannick Bahati vs Norman Wessels middleweight title fight. There are rumours that this bout will also not happen. Cartmell offered up some potential opponents for Bahati should Wessls not accept the bout. Dricus du Plessis and Champion Dalcha came to the forefront of the discussion.

More on the highly anticipated rematch for the title between Lino and Trosee, and the controversy surrounding the middleweight and light heavyweight divisions coming soon.