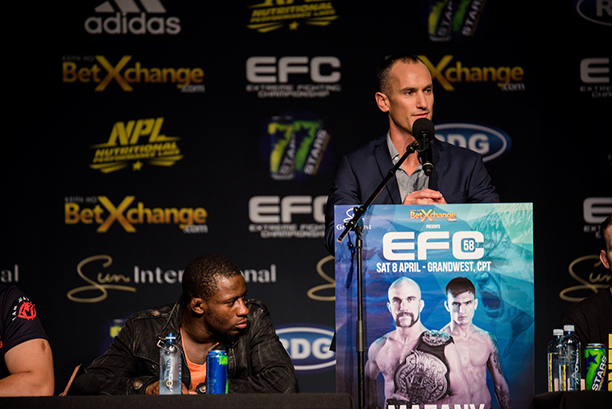 Johannesburg, South Africa – EFC has had a fantastic start on SABC 3, drawing massive numbers of viewers.

“These are great results for EFC’s launch month on SABC 3,” stated EFC President Cairo Howarth. He continued, “This partnership with SABC Sport and SABC 3 is a massive success!”

There are also many millions more watching EFC on TV in another 120 countries, these are only the SABC 3 South African viewer ratings.

With live coverage and over 200 hours of airtime on SABC in 2017 – over 10 times the amount of airtime on free-to-air TV in South Africa in comparison to last year – combined with Kwesé Sports and EFC’s numerous other international TV broadcasts, the EFC brand, athletes and associated partners get vast amounts of promotion on TV. Hours every week broadcast to millions of fans across South Africa and the world.

Data is provided by Neilsen Sports for EFC on SABC up until and including the EFC 57 live broadcast.

All eyes now turn to EFC 58: Mazany vs Madge, presented by BetXchange.com on Saturday 8 April 2017 at GrandWest, Cape Town. Tickets are on sale at www.computicket.com, and the 5 main card bouts will be broadcast live on kwesesports.com (Sub-Saharan Africa), Kwesé Free Sports (Kenya & Rwanda) and live in South Africa on SABC 3 starting at 21:00 (CAT). Full broadcast details available on www.efcworldwide.com.