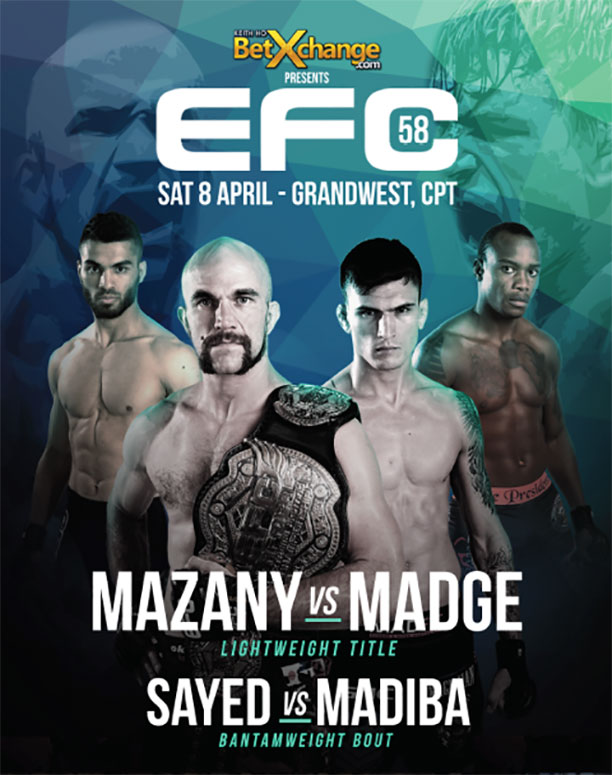 Cape Town, South Africa – In the lead up to the momentous EFC 58 Cape Town event, the organisation has launched a new series, EFC Engaged. Delve deeper into the lives of Dave Mazany and Don Madge than ever before during their final week of their preparation. See episode 1 here and look out for more coming soon: https://youtu.be/0RzLSAKGLJA

On Saturday 8 April 2017, the champion of the 155 pounders, Las Vegas, Nevada’s Dave Mazany, is set to defend his EFC title in Cape Town, South Africa against local favourite and former champion Don Madge.

Dave Mazany is a natural born showman who boasts an immensely strong wrestling background. Not only is he undefeated in the EFC, he has dominated and finished every opponent placed in his path. His challenger, Don Madge is a Muay Thai specialist and one of the most gifted athletes in the organisation. He has captured the championship in enigmatic fashion before and now looks to do it once again.

Only one will be victorious and claim the ultimate title, make sure you get to GrandWest and witness it live for yourself. Watch the countdown to Mazany vs Madge here: https://youtu.be/MD2CmI6iDF8

Preceding the main event, former interim bantamweight champion Irshaad Sayed returns home to the Mother City for a new challenge. Now fighting out of Queenstown MMA in New Zealand, Sayed is adamant to get his rematch with Pena and claim the bantamweight gold; but standing in his way is the electrifying Tumisang Madiba. A born showman, ‘The President’ is celebrated for his high-flying backflips and aggressive style, plus an insatiable hunger for success. Fighting out of Fit-Mac in Paarl, Cape Town, he is sure to bring the fight of a lifetime to Sayed. Watch the countdown to Sayed vs Madiba here: https://youtu.be/ZwggiyOWXXo

UK’s Karl Etherington, an extremely experienced and dangerous heavyweight travels to Cape Town for his EFC debut. Fighting out of Enigma in Blackpool, England, he is scheduled to face-off against the UFC veteran and former EFC champion, Ruan Potts.

Durban’s Abdul Hassan goes head-to-head with Zimbabwe’s best, Sylvester Chipfumbu, and set to open the main card in a blaze of excitement sees the return of crowd favourite Shaun de Lange. After a year-long layoff, de Lange has a mammoth task in a former welterweight champion, Dino Bagattin. This fight promises to be non-stop action from start to finish.

EFC 58: Mazany vs Madge, presented by BetXchange.com takes place on Saturday 8 April 2017 at GrandWest, Cape Town. Tickets are on sale at www.computicket.com, and the 5 main card bouts will be broadcast live on kwesesports.com (Sub-Saharan Africa), Kwesé Free Sports (Kenya & Rwanda) and live in South Africa on SABC 3 starting at 21:00 (CAT). Full broadcast details available on www.efcworldwide.com.