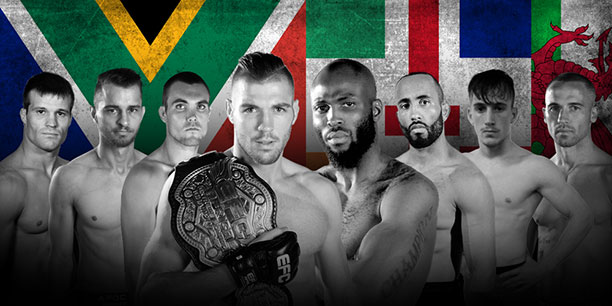 Johannesburg, South Africa – Many of Europe’s most formidable athletes are making their way to Carnival City, Johannesburg to challenge South Africa’s best. The EFC 59 event is scheduled for Saturday 13 May and sees top contenders from Ireland, England, Wales and France take center stage at the southern hemisphere’s biggest MMA organization.

Headlining the upcoming fight night sees Ireland’s Henry ‘Herculeez’ Fadipe challenge the champion, Dricus ‘Stillknocks’ du Plessis for the highly coveted EFC welterweight championship. A former champion himself, Fadipe, hails from Dublin and has long believed that he is the rightful king of the division. He sees the Pretoria based du Plessis as an imposter to his throne and the KO artist is determined to reclaim his belt.

In the co-headline fight the English striking phenomenon takes on a South African technical brawler of the highest caliber. Joe ‘Silk’ Cummins’ faces Shaun de Lange in what pundits are calling “the fight to watch out for”. The Birmingham resident, Cummins, has shown to be unparalleled on the feet, but de Lange is fresh off a winning ‘Fight of the Night’ performance and is looking to continue his streak. Cummins has been searching for an opponent willing to stand and trade with him, and in de Lange, he might just have met his match.

With what is sure to be a number one contender eliminator bout, France’s Phillipe Rouch has entered EFC and has pointed his focus firmly on one of the most perilous there is, Francois ‘Franaconda’ Groenewald. The bantamweight division has been long-time ruled by champion, Demarte Pena and both the Frenchman and the local favourite are resolute that they will be the one to challenge him next. Fighting out of Bushido Academie in Avignon, France alongside former EFC heavyweight champion and current UFC heavyweight Cyril Asker, Rouch is determined to leave his own unique mark on the organisation. Both are renowned for their submission skills and both have their eyes set on gold.

The Welshman, Azi ‘One Bomb’ Thomas made a massive impact and statement the first time he competed on African shores. It immediately solidified him as a major threat and after going on to follow it up with a ‘Fight of the Night’ first-round finish over a former contender, it placed him right at the top. Fighting out of Hamma MMA in St. Helens, England, Thomas is confident that he is the best. But to get a shot at the featherweight belt, he first needs to succeed by going head-to-head with South African wrestling champion, Pierre Botha.