GOOD TO FIGHT ANOTHER DAY 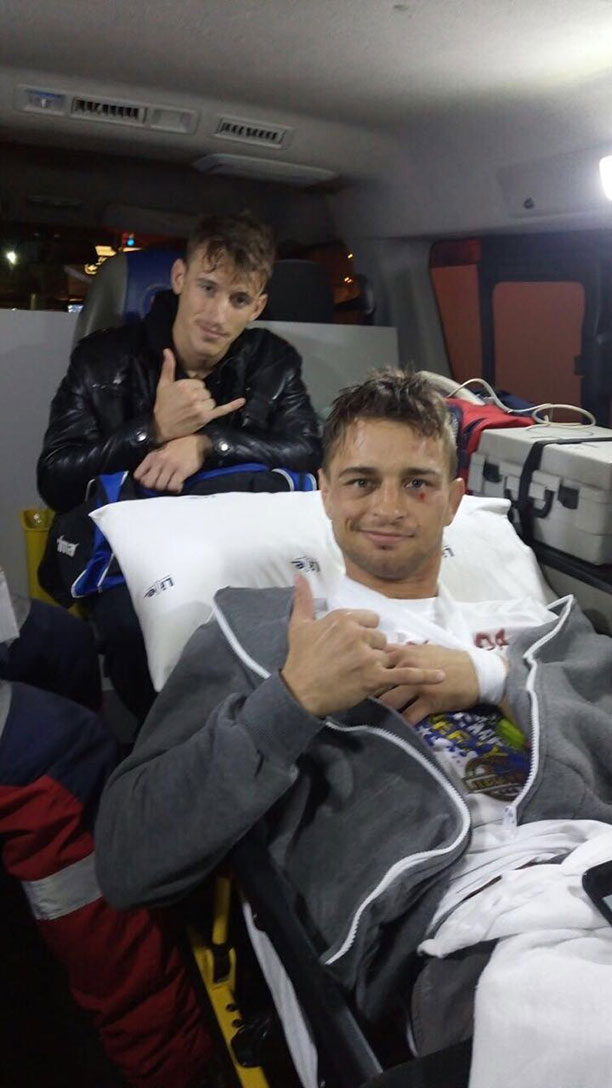 Johannesburg, South Africa – EFC 59 will go down in history as an epic event filled with memorable fights and finishes. Most notably Ilunga’s flush KO of Nienaber, Francois Groenewald and Phillipe Rouch’s masterclass in grappling and the welterweight title fight between Dricus du Plessis and Jose Da Rocha that saw du Plessis successfully defend his belt with brutal ground and pound.

Many enquired as to the athletes’ statuses after the event. All have been medically cleared and all that went to hospital for precautionary measures were discharged on the night.

“He threw a spinning back kick and I guess I was going for a takedown as he turned around,” explained Nienaber when asked for comment. His kick caught me on the trip switch. The doctor cleared me with no damage and I feel great!”

Nienaber was taken to hospital for precautionary scans after the devastating KO, but was later discharged.

Later in the evening, Groenewald, Rouch and Da Rocha were taken to hospital.

After a gruelling encounter that won them ‘Fight of the Night’, Groenewald and Rouch were transported in the ambulance together, and both were in high spirits, so much so, that there are reports of them challenging each other to wheelchair races around the corridors of Sunward Park hospital.

Groenewald dislocated his elbow in the first round of their fight and Rouch was suffering from a suspected fracture in his cheek bone. Both athletes were discharged.

The Brazilian Da Rocha, was suspected of having broken ribs from his fight against du Plessis. However, once the x-rays were reviewed; it was discovered to be soft tissue damage and he was cleared to fly home on Sunday evening.

“Thanks to Constantia Insurance we are able to provide EFC athletes with world class medical coverage,” stated EFC President Cairo Howarth. “As athlete health and safety is our number one priority, we are ever grateful for their partnership, and are proud to be able to look after our athletes to the best of our abilities.”

In December 2015, EFC and Constantia Insurance signed a historic deal that saw all competing EFC athletes covered for medical insurance while competing in the EFC Hexagon. A first for any combat sports organisation on the African continent. You can read more about it here: http://efcww.com/2qv9Uwn

Along with this comprehensive cover, EFC also runs a stringent health and safety protocol that requires athletes go for MRI scans upon signing with the organisation, that is supplemented by EFC. Athletes are also subject to medical check-ups every time they compete, in which the attending doctor has final say on whether the athlete is fit to compete or not. Athletes are also required to pass HIV and Hepatitis-B blood tests in order to compete.