“I’M NOT GOING TO STOP UNTIL I FINISH HIM” 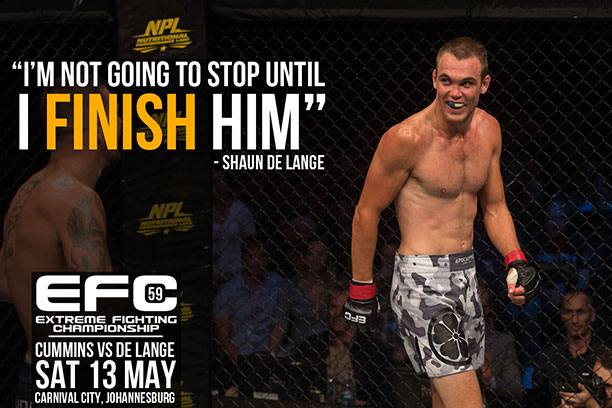 Johannesburg, South Africa – Shaun de Lange is many things, most notably a young man that is happiest during the organized chaos of a fight, and man that accepts any opponent offered to him.

After an incredible fight of the night performance just over a month ago, de Lange will once again step into the Hexagon, but this time to face another born of similar cloth, England’s Joe Cummins.

In a recent interview with Kwesé Sports, de Lange talked about his thoughts on his upcoming British opponent and how he foresees the fight going. You can read the full interview here: http://efcww.com/2qJD1P0

Below is an extract from the interview:

“I don’t know the guy but I’ve seen some footage and he has good striking and a good ground game,” he said.

“It will be a good test for me. I’m always ready for a fight so it doesn’t matter if he called me out. I’m the type of fighter who will always go out there and fight hard and will put on a show.

“I’m going to be aggressive, I will be in his face and I’m not going to stop until I finish him. That’s always my game plan,” he said.”

This exciting bout takes place on just ahead of the main event of the evening where South Africa’s Dricus du Plessis will defend the EFC welterweight championship against Brazil’s Jose Da Rocha.