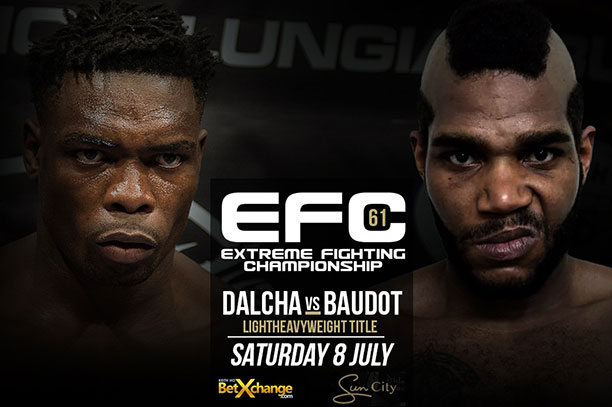 Johannesburg, South Africa – The light heavyweight division has always been one of the most volatile and controversial divisions within EFC and recent times have been no different. In many fans eyes, FFM’s Norman Wessels is still seen as the top player, and his teammate, Chad Hanekom next in line, but recent events have shown that the division is in fact guarded by only one, the former interim champion, and now reigning champion, Dalcha Lungiambula.

It’s been a hard-fought road for the DRC MMA megastar. When Dalcha Lungiambula entered the organisation and made his EFC debut he was a relative unknown, but that changed fast. In his first bout he faced and defeated the experienced Roelof Scheepers. He then went on to defeat famed kickboxer Pete Motaung and subsequently, on short notice, beat the former heavyweight champion, Danie van Heerden.

With three solid wins in a row, including one against a highly ranked opponent, Dalcha began to be seen as a major threat. But it was his next fight that truly garnered him support amongst EFC fans. Dalcha took the victory that many didn’t think he could. He defeated the English giant and the current middleweight champion, Yannick Bahati, and again, on just a few days’ notice.

His performance against Bahati and the events surrounding it, including his undefeated streak, earned Dalcha a shot at EFC light heavyweight gold.

In August 2015, the then, light heavyweight champion, Norman ‘Chef’ Wessels defended his title, for the first and last time.

Wessels defeated the rising DRC star and immediately Dalcha made it clear; he wants, and would do anything to get, a rematch.

Due to tragic personal circumstances, it was not suitable for Wessels to defend his title, and for some time he rightfully declined all challenges. A rematch would not ensue.

EFC decided that an interim light heavyweight title fight would be put on and it was contested between two division leaders. Fresh off a massive win over the former UFC heavyweight and former EFC heavyweight champion, Ruan Potts, the man that was chosen to go head-to-head with Dalcha for the interim championship was Tumelo ‘The Truck’ Maphutha.

In an epic five-round war, Dalcha showed his growth as an athlete, displaying a newfound timing and patience to better execute his notoriously explosive takedowns, slams and heavy hands. Dalcha was victorious and became the interim EFC light heavyweight champion.

Although, still taking time out from competition, pressure for Wessels to once again meet Dalcha was at an all time high. However, it is clear that pressure does not phase the two-time EFC champion, and with the intention of dropping to middleweight to face the current reigning champion, England’s Yannick Bahati, Wessels chose rather to relinquish the light heavyweight title.

Competing at middleweight would be a massive task for the former heavyweight to undertake and ultimately the bout between the two giants of MMA did not happen.

The decision for Wessels to relinquish would also allow upcoming talent and teammate, Chad Hanekom, who defeated the likes of Ruben Groenewald, Cian Errought and Wade Henderson, the space needed to challenge for the light heavyweight division’s top spot.

Dalcha, the now reigning champion, was in need of a challenger.

Opperman, was offered the first shot at Dalcha and the bout was scheduled to take place in March of 2017.

Hanekom was offered the next shot at the belt and it was verbally agreed that he would face the winner of Opperman and Dalcha for the title in July 2017.

Opperman was subsequently suspended by SAIDS and was forced to pull out of the March 2017 fight. Hanekom was offered to replace Opperman on the March card, but he declined and for numerous reasons, asked EFC matchmaker to keep his title fight in July.

Unfortunately for Dalcha, he was left without a suitable challenger and he did not compete on the March card. He accepted to defend against Hanekom in July.

Subsequently, and for varying reasons given to EFC, Hanekom has declined to fight Dalcha and insists that he did not accept the fight in the first place.

This string of events left Dalcha Lungiambula, the champion, with no opponent… but the absence of a true contender only existed until the organisation’s latest signing raised his hand. Stepping up to the challenge of facing the formidable DRC athlete is a fighter with a reputation as dangerous as, and as devastating as one ever seen in the organisation. Holding a perfect, undefeated international fight record of six wins, all by way of KO/TKO, EFC introduces, France’s Alan Baudot.

More on the French knockout king, who dares to claim the light heavyweight top spot from the champion, Dalcha Lungiambula coming soon.

EFC 61: Van Zyl vs Mostert, Dalcha vs Baudot is presented by www.BetXchange.com. Tickets are on sale soon at www.computicket.com, and the 5 main card bouts will be broadcast live on kwesesports.com (Sub-Saharan Africa), Kwesé Free Sports (Kenya & Rwanda) and live in South Africa on SABC 3 starting at 21:00 (CAT). Full broadcast details available on www.efcworldwide.com.