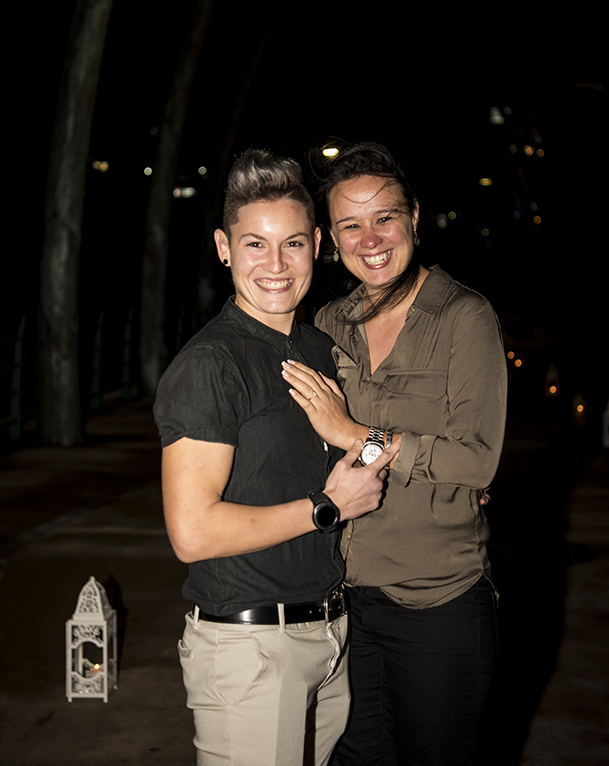 A huge congratulations from the EFC team!

When mixed martial arts fighter, Amanda Lino won the women’s featherweight title belt two weeks ago at EFC 60, everyone wanted to know what was next for Lino.

Would she defend her title against the French Mademoiselle, Isabel Pare or did the EFC have something else up their sleeve for Ballito’s Maddog?

Little did fans know that Lino was about to get down on one knee and ask her girlfriend of five and a half years, Charlene Erasmus for her hand in marriage on Wednesday, June 21.

Recreating their first date on October 25, 2011, Lino took Erasmus out on the most romantic date of her life, filled with the little things that were special to them. Lino even hired a photographer to secretly photograph the evening, paparazzi style.

The evening started with drinks at a little hole in the wall in Umhlanga called Tapas on the Block where the two went for drinks on their first date. From there the couple went to Doppio Zero at the Pearls Mall where they shared a romantic dinner, followed by a leisurely stroll down to the Whalebone Pier which Lino had lined with candles. As the two walked onto the pier, Lino went down on one knee and asked Erasmus to marry her on the same spot where they shared their first kiss.

“Yes! What took you so long?” said Erasmus with tears of joy streaming down her cheeks.

The following night, Lino took Erasmus to Fiamma Grill where a surprise engagement party had been arranged and on Friday Lino whisked Erasmus away to San Lameer for a surprise weekend away.

Lino and Erasmus said they did not want a big wedding.

“We will have a small beach wedding in Thailand or Mauritius with our close friends and family,” said Lino.