Perfect weight for all at EFC 60 weigh-in 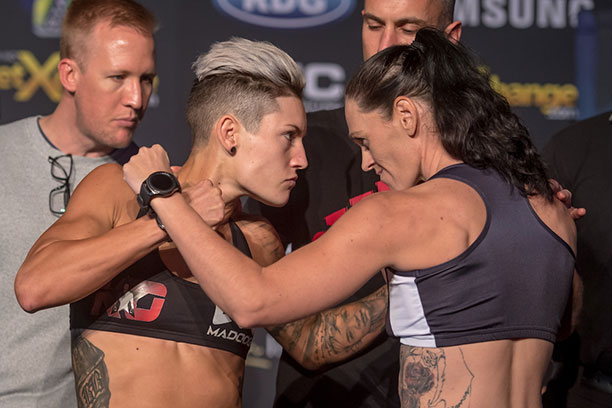 A. HASSAN VERSUS MASUNYANE
ROODMAN VERSUS MEINTJES
CUTENDANA VERSUS M. DE BEER

Durban, South Africa – The Sun Park at Sibaya Casino & Entertainment Kingdom was rocking and rolling this afternoon when Durban’s sharpest fighting athletes hit the scales, ready to take on the MMA world at EFC 60 tomorrow night.

The two have fought before, on that occasion Lino knocking Trosee out in just 10 seconds. Both fighters acknowledged that meeting to be far in the past, expecting a new level of intensity and experience when they enter the Hexagon tomorrow night.

Their face-off was full of the respect of proven warriors. They too have fought before, and they too have re-invented themselves into athletes at the pinnacle of their destructive power.

This match-up has fight of the year written all over it, full of immense skill and rich history.

Durban’s iconic Abdul ‘Hollywood’ Hassan greeted relative newcomer Bokang Masunyane with an ice-cool stare, leaving the new man in no doubt that Durban is Hassan’s hometown and her fans his people. Their match-up is another must see.

Cameron Meintjes takes a bold step on his growing career in his match-up against crowd favourite Gordon Roodman. The local greeted Roodman with a smile, feeding off the support flowing through the venue for the man from Queensburgh.

Angola’s Marino Cutendana opens the main card when he welcomes local Martin De Beer to the pressure of the live broadcast, beamed around the world. De Beer took the exposure in his stride, meeting the experienced Cutendana with rock solid composure.

The event opening bout between Angola’s Josemar Octavio and Durban’s Radley De Vries was cancelled, due to Octavio failing to secure a travel visa in time.

The official EFC 60 weigh-in results are as follows:

EFC 60: Lino vs Trosee 2, presented by BetXchange.com takes place on Saturday 10 June 2017 at Sibaya, Durban. Tickets are on sale at www.computicket.com, and the 5 main card bouts will be broadcast live on  (Sub-Saharan Africa), Kwesé Free Sports 1 (Kenya & Rwanda) and live in South Africa on SABC 3 starting at 21:00 (CAT). Full broadcast details available on www.efcworldwide.com.