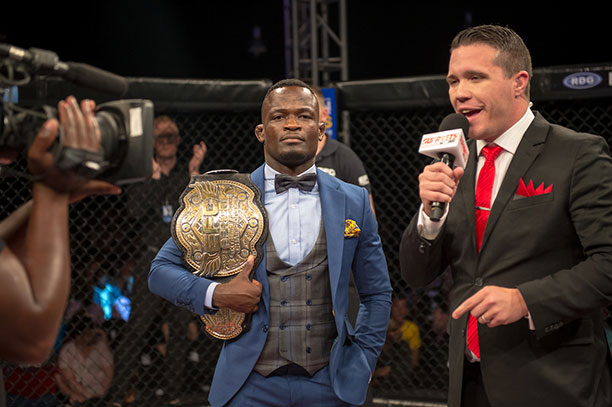 After a lengthy investigation and hearing the final ruling, which has come with far-reaching consequences, was handed down. SAIDS has directed the result of the fight between Pena and Sayed to be vacated.

The result now changes to a no contest. Pena remains champion and, as Irshaad Sayed effectively did not lose the bout, he is reinstated as the interim bantamweight champion.

In summary, the following was decided at the independent hearing conducted on 25 May 2017 by SAIDS, chaired by respected sports lawyer, Professor Steve Cornelius:

Pena was found guilty of inadvertent use of a prohibited substance prior to his fight with Sayed.  It was acknowledged that Pena had not acted with intent, significant fault or negligence, due to the fact that the banned substances in question were traced to contaminated supplements.

It was further acknowledged that Pena had declared he was taking said substances, and that he had checked that the ingredients listed did not contain any prohibited substances before consumption.

In preparation for his hearing, Pena provided detailed daily records of the supplement consumed, as well as laboratory evidence showing the contaminated supplements contained the banned substances in question.

Before the hearing the minimum prescribed interim sanction was implemented against Pena, namely a provisional suspension, which lasted for slightly more than three months. Due to the finding by the panel of no intent, significant fault or negligence by Pena, the suspension was dissolved at the conclusion of the hearing.

“SAIDS conduct a grueling and extremely thorough hearing. Each case is determined on its own facts and EFC have nothing to do with the decision of the independent panel,” stated EFC President Cairo Howarth.

SAIDS abide by and follow the rules and regulations of WADA internationally. EFC representatives were present at the hearing and it is believed that fair and proper procedure was followed in accordance with SAIDS and WADA.

Part of Pena’s statement which was submitted to the hearing was as follows:

“I took advice from professionals and persons with experience regarding sports supplementation and satisfied myself (through internet searches and checking the product labels and package inserts) that the supplements did not contain any prohibited substances. I took these supplements and disclosed this fact to SAIDS… I have always followed the rules of competition and live a healthy lifestyle. I have been tested throughout my MMA career, on at least nine occasions (both in- and out of fight camp) and the results have always shown that I do not violate any rules pertaining to supplement use…”.

If any athlete tests positive to a banned substance, the process it takes for SAIDS to make a final ruling is thorough. Information shared with EFC during the time of investigations and hearings is confidential and only under specific circumstances is it possible for the information to be made public.

“We’ve been asked why the information surrounding Pena’s case with SAIDS was not made public earlier, contrasted to other cases in the past,” said Howarth. “The answer is that Demarte was not publicly scheduled to compete, therefore his case with SAIDS could stay confidential as per SAIDS normal procedures. Further, because the investigation was not yet complete and a ruling had not yet been made, we were under obligation to let the SAIDS process run its course. In other cases athletes have been publicly scheduled to compete at upcoming events, and it has therefore been necessary to openly explain why the athletes were forced to be removed from any coming bouts.”

“We respect and thank SAIDS for their professionalism. Their investigation and handling of the hearing bodes well for the sport of MMA,” said Howarth. “South African athletes are in good hands and our sport as a whole is getting the professionalism it deserves. It would have been easy to jump to conclusions at any stage of this process, but appropriate procedures have been followed ensuring a just outcome.”

“The issue of contaminated substances is one that every professional athlete needs to navigate,” he concluded. “This highlights the importance of athletes always knowing exactly what they are ingesting.”

The official SAIDS ruling can be found here: http://efcww.com/2swmE7e.

The official statement from Demarte Pena can be found here: http://efcww.com/2rIlWq7