ZULU TO DEFEND AGAINST CHIPFUMBU 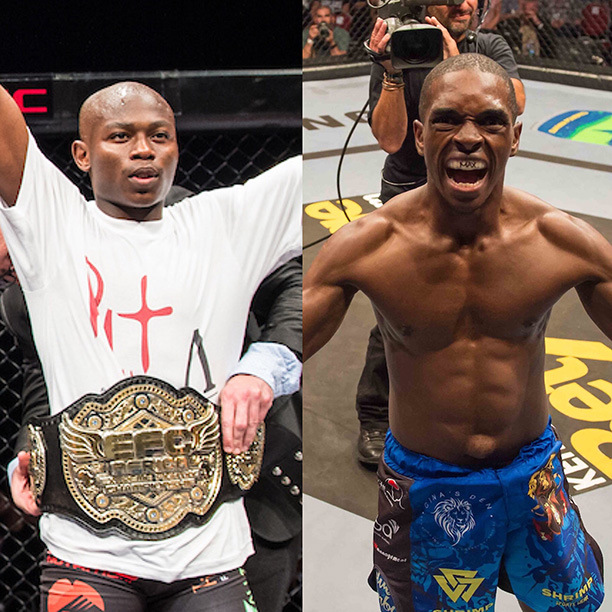 The South African Zulu made EFC history by becoming the organisation’s first bantamweight champion, and hit the history books again by taking the flyweight belt also.

Invited to compete on the US based reality TV show ‘The Ultimate Fighter’, he was out of EFC action for a year, honing his skills in both the TUF house and afterward as one of Olympic gold medalist wrestler and UFC title challenger Henry Cejudo’s training partners. Now, back at Team Tribe in Johannesburg, he is ready to defend.

His opponent is a surprise prospect.

JP Buys that earned the interim bantamweight championship whilst Zulu was out of action, but in a strange twist of fate Buys is now competing in the USA, leaving a path open for Chipfumbu.

“JP was offered a great opportunity to compete in the States,” said EFC President Cairo Howarth. “We know he is going to dominate there, and we look forward to seeing him back to unify the flyweight title soon.”

Chipfumbu has been staking a claim for a title shot since entering the EFC. Fighting out of Gina’s Den in Cape Town, South Africa, he has put on multiple highlight reel displays, most recently knocking out veteran Abdul Hassan.

Undefeated (4-0), tall and tactical, he holds a vast reach advantage over Zulu. His strikes are sniper-like and his takedown defense is sublime with zero successful takedowns against him.

Where his countrymen Themba Gorimbo and Elvis Moyo have come close, Chipfumbu believes he will be EFC’s first Zimbabwean champion.

“Sylvester has been setting the flyweight division alight,” said Howarth. “Ever since his first fight with us, it’s been obvious that he would one day be a title challenger.”

His opponent is tempered by steel, however. After returning from the grueling TUF competition and the extra tutelage under Cejudo, Zulu is repurposed and re-invented. He’s as dangerous as they come, and shows no signs of letting go of his belt.