#ANDSTILL AT THE SUPERBOWL

Van Zyl and Dalcha defend their titles at EFC 61 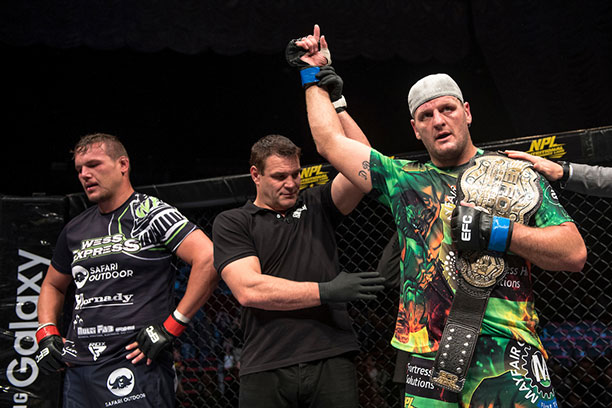 Before his bout Van Zyl had said that he outperforms his opponent Mostert (RSA) in every area, but he was only half right. Mostert landed punch after punch, ringing the bell of the champ over and over, with particular success with a whip-like hook in either fist.

Although his defence was poor Van Zyl’s famously iron jaw was solid. He hunted for the takedown and found it in the third round, immediately setting to work with dominant top control and relentless ground and pound.

It was France’s Baudit that was tipped to be the more skilful athlete in the light heavyweight title fight. He abandoned technique when the champion invited him into a dog fight, however, and went sailing to the canvas after only 26 seconds – knocked out clean.

Dalcha has now defended his title, and a new challenger materialised immediately.

England’s Austin took on Zimbabwe’s Moyo at heavyweight, and stuck to a rigorous game-plan that included slowing the Zimbabwean slugger down with leg-kicks, opening the take-down opportunity by forcing him to over-extend, and dragging the ‘Bulawayo Bomber’ to the canvas as soon as possible.

He succeeded in rounds two and three, dominating with top control to finally take a unanimous decision victory.

Entering the fight at only 103kg, at the press conference after Austin was asked whether he would drop to light heavy, and if so, would he consider a crack at Dalcha?

In the blink of an eye a title fight was in the works, with EFC president Cairo Howarth lending his weight to the idea.

The Congo’s Ilunga took on fellow countryman Anicet Kanyeba in a bad-blood match up that sizzled in the first round. Ilunga toyed with Kanyeba with skillful kicks landing all over, but was unable to finish the fight. It took a unanimous decision to give him the victory – a result which did not reflect the grit that Kanyeba showed.

A new star was born as the main card kicked off. Jacobs Jacobs (RSA) is on a whirlwind ride. He scored a highlight reel victory in his first bout at EFC 58, was given a high profile opponent in Pheko (RSA) for this event, and then due to a fight cancellation, was dealt a wild card slot on the main card.

Jacobs took the opportunity with everything, trading weaving strikes with Pheko until a front kick dropped him, and using ground and pound put him away. Pheko took a ride to hospital with a massive hematoma on the side of his head, and Jacobs stepped into the limelight.

“What’s it like being Faeez Jacobs right now?” was asked at the press conference.

“It’s amazing,” said Jacobs. “I’ve been visualising this for a very long time. It’s just happened a lot sooner than I planned.”

Fight of the night was awarded to Andrew Van Zyl vs Wessel Mostert. Performance bonuses were given to Gunther Kalunda (DRC), Josemar Octavio (Angola), and Champion Dalcha for his walk-off knock out of Alan Baudot.

The official EFC 61 results are:

EFC 62: Bahati vs du Plessis, presented by BetXchange.com takes place on Saturday 19 August 2017 at Carnival City, Johannesburg. Tickets are on sale at www.computicket.com, and the 5 main card bouts will be broadcast live on  (Sub-Saharan Africa), Kwesé Free Sports 1 (Kenya & Rwanda) and live in South Africa on SABC 3 starting at 21:00 (CAT). Full broadcast details available on www.efcworldwide.com.