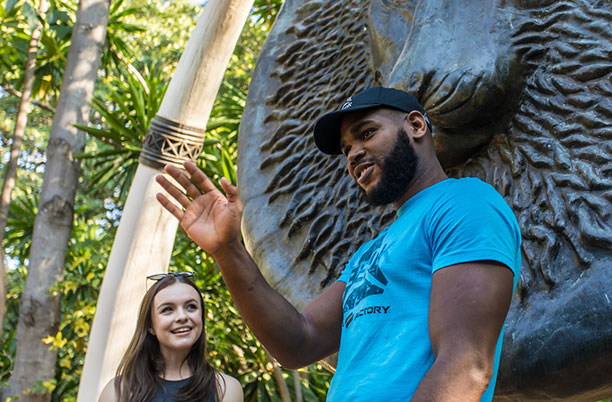 Sun City, South Africa – There comes a time that will always be referred to as the defining moment in any athlete’s career, the moment they will look back to and know; that’s when everything changed. Saturday 8 July in Sun City, South Africa, is where France’s Alan ‘Black Samurai’ Baudot hopes his moment will come.

Baudot’s opponent, EFC light heavyweight champion Dalcha Lungiambula, is unquestionably one of the organisation’s most feared and loved athletes. While he is from the DRC he has made South Africa his home. At a Dalcha fight it goes without saying that the auditorium will ring with the chants of his DRC brothers, filling him with memories of family.

Baudot is new to EFC and therefore a relative unknown force, but he is no stranger to fighting in foreign lands. MMA is illegal in his home country of France, meaning he has fought most of his career in the country that christened him ‘The Black Samurai’; Japan.

Baudot’s record promises pure destruction. Undefeated, he has finished all six of his opponents before the final bell, with eighty-percent of those within the first round. His striking is lethal.

“I will knock him out, just like all the others,” stated Baudot in a recent interview.

Dalcha is renowned for his explosive judo throws and takedowns, holding a near perfect takedown success rate. But it is where Dalcha is strongest that Baudot believes he is best at countering. “I can cause a lot of damage with knees, especially against Judoka and wrestlers in the clinch,” he explained.

Already a champion in the Japanese promotion HEAT, Baudot is aiming for world domination and is adamant that he will add the EFC belt to his resume.

“In Sun City I will put on a big war and snatch the beautiful EFC championship belt,” he said.

What could be more career defining than stepping in to face the EFC champion in the Superbowl, one of the most prestigious arenas in the world? In a division where no one would step forward to challenge Lungiambula, Baudot didn’t as much raise his hand as metaphorically smash his fist through the roof at the opportunity. For France’s Baudot, the hunt is on.

This bout takes place as the co-main event, just ahead of the EFC heavyweight championship fight between Andrew van Zyl and Wessel Mostert.