Van Zyl vs Mostert, Dalcha vs Baudot, on weight for EFC 61 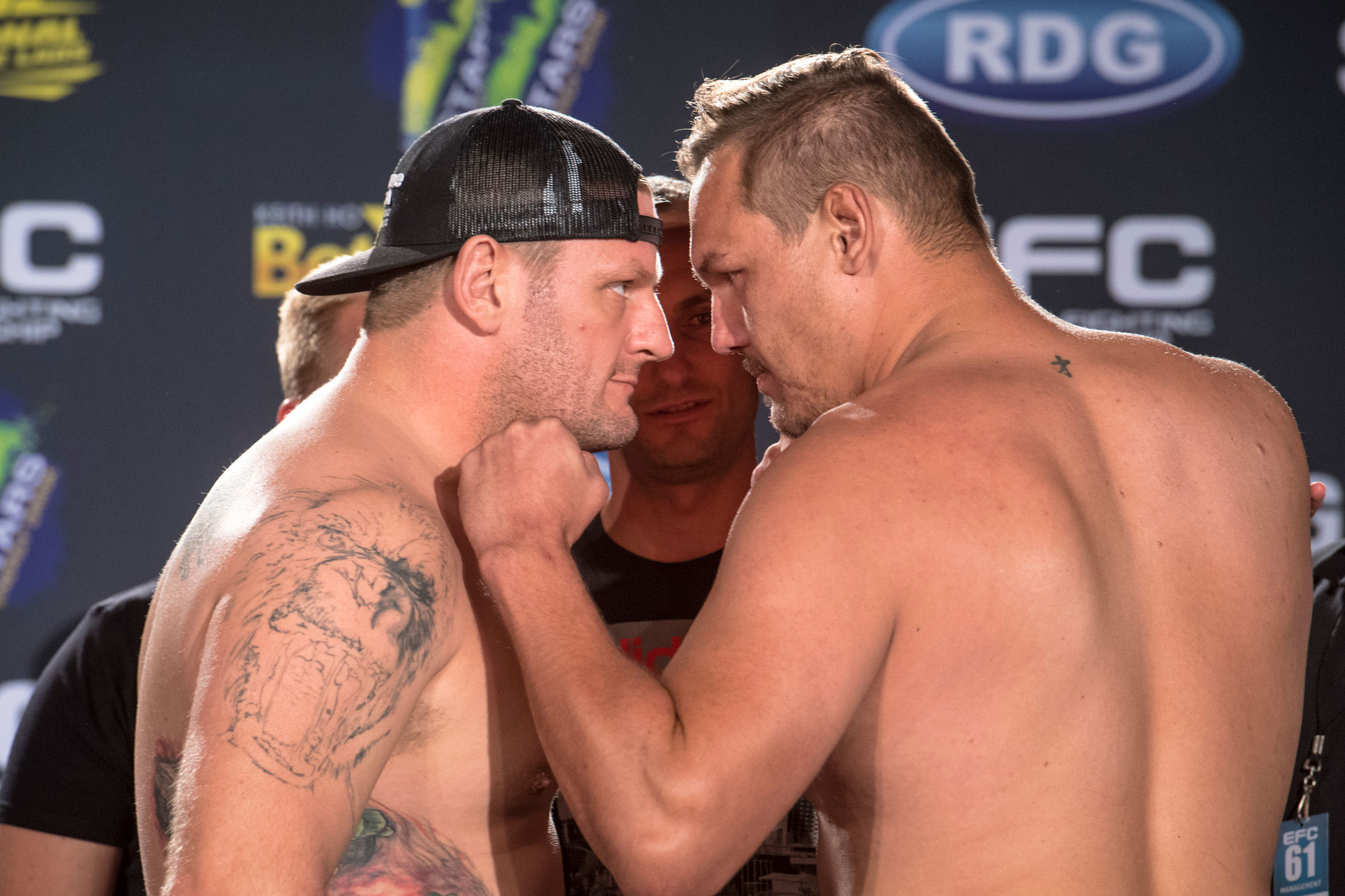 Heavyweight champion Andrew van Zyl defends his title against undefeated challenger Wessel Mostert. Van Zyl is the most decorated athlete on the EFC roster and let his opponent know it.

“He’s a young, hungry lion,” said Van Zyl. “But I am better than him in every aspect of the game.”

“I’m fitter, stronger and faster than I have ever been. The belt will be mine,” replied Mostert.

The DRC’s Champion Dalcha defends his light heavyweight title. Activity in the arena screeched to a standstill when Dalcha emerged and his men from the Congo began chanting.

Hailing from France and having stepped onto African shores for the first time only one week ago, Alan Baudot seemed visibly surprised at the intense adulation Dalcha enjoys, an almost mystical bond with his supporters.

“I’m ready to keep my belt and put on a show,” said Dalcha. “It’s not about the words. It’s about what you do in the Hexagon.”

He raised one fist to the crowd. It seemed a sign of respect to the men from the Congo, as well as a warning.

The youthful Austin has absorbed a ton of teasing from the Zimbabwean in the build up, and taken it in his good-natured stride. But all fun left the eyes of both when it came time to face-off.

“This is the match you want to watch,” said Austin during the week’s build-up. The crowd seemed to agree.

A record three different athletes broke their composure and pushed their opponent during their face-off, such was the intensity of the event.

One of these was Kanyeba Anicet vs former bantamweight title challenger Alain Ilunga. Their bout has a long history of on and off, and with it growing bad blood. It spilled over. They jumped at each other, security diving in to separate them.

Due to a late fight cancellation relative EFC newcomers Faeez Jacobs and Kevin Pheko receive a dream bump-up to the main card. Both were super-charged at weigh-in, both are thrilling strike specialists, each is motivated to deliver a beautiful fight tomorrow night.

One athlete failed to make weight. Tresor Boluwa opted for a financial penalty.

The official EFC 61 weigh-in results are as follows:

EFC 61: Van Zyl vs Mostert, Dalcha vs Baudot is presented by www.BetXchange.com and takes place on Saturday 8 July live from the Superbowl at Sun City in North West province, RSA. Tickets are on sale at www.computicket.com, and the 5 main card bouts will be broadcast live on (Sub-Saharan Africa), Kwesé Free Sports 1 (Kenya & Rwanda) and live in South Africa on SABC 3 starting at 21:00 (CAT). Full broadcast details available on www.efcworldwide.com.