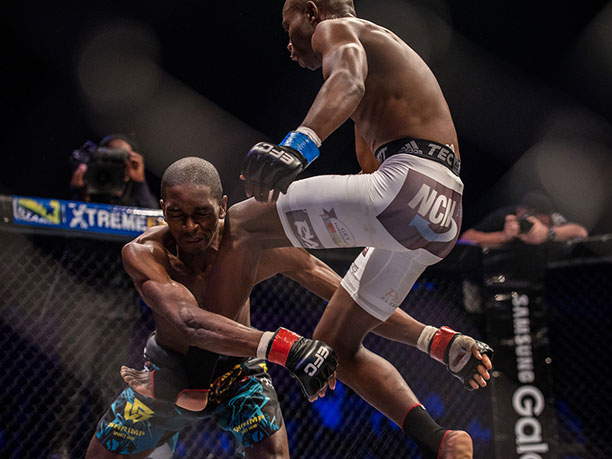 Johannesburg, South Africa – Flyweight contender Sylvester Chipfumbu travelled to hospital with a suspected orbital bone fracture after his title fight with flyweight champion Nkazimulo Zulu at EFC 62 on Saturday night. It is now confirmed that Chipfumbu has suffered a broken orbital bone as well as a cheek bone fracture, and will undergo surgery later this week.

Chipfumbu has received full coverage from Constantia Insurance, who will cover his hospital costs in full as well as contribute to his loss of earnings while he recuperates, a benefit extended to all EFC athletes.

Zulu and Chipfumbu won fight of the night honours for their back and forth striking war, and it was the defending champion that emerged the victor with a fourth-round TKO. The fight can be viewed on the Kwese app, available for download from the Google Play and iOS App stores.

EFC and Constantia Insurance made headlines in 2015 for their historic partnership that sees EFC athletes covered for their fights inside the Hexagon, a benefit extended to very few professional MMA athletes around the world.

Chipfumbu will receive surgery in Johannesburg later this week, once his facial swelling has subsided.