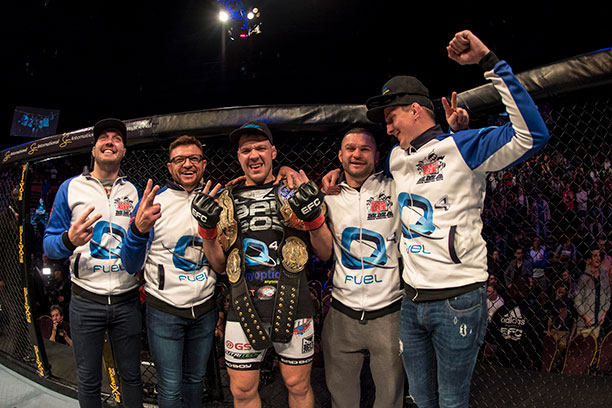 Johannesburg, South Africa – The biggest night in EFC history had a fairy-tale ending tonight, when South Africa’s Dricus du Plessis became the first man in the organisation’s history to hold a title in two divisions simultaneously. Flyweight champ ‘Zulu Boy’ Nkazimulo Zulu also defended his title, and Igeu Kabesa re-took the featherweight strap. The evening’s main event was contested between EFC welterweight champion Dricus Du Plessis, and EFC middleweight and BAMMA champion, the UK’s Dricus du Plessis and middleweight champion Yannick Bahati. Du Plessis did what many thought was impossible and finished Bahati by brutal guillotine in the first round, obliterating his opponent and stepping into a new era of the organisation.

Bahati was gracious in defeat, and agreed that if Du Plessis wanted to return the favour and meet him in the UK for his BAMMA title, he would be happy to oblige.

Nkazimulo Zulu lived up to his reputation by delivering a stand-up masterclass. Although Sylvester Chipfumbu troubled Zulu in the first, thereafter the champion dismantled his opponent, leaving him cowering in the fourth when the referee finally called it off.

Kabesa against Pierre Botha for the vacant featherweight title was always going to be wrestler vs wrestler, and it was a poorly timed suplex that sealed Botha’s fate. Storming into the first, he was controlled by Kabesa, attempted a suplex escape against the fence and gifted his opponent the full mount position. The fight ended by TKO (punches) in the first.

The UK’s Cal Ellenor made his EFC debut against local favourite Gareth Buirski, and both fought a hard fight to final bell. The judges’ decision caused consternation when they ruled in favour of Buirski (split decision), with most of the crowd convinced the foreigner had done enough to take it.

Sindile Manengela and Barend Nienaber put in two hard rounds of even fighting in their main card opener, until Manengela found the edge in the third, finishing his opponent from Pretoria by rear nake choke.

Performance bonuses were awarded to Ngcobo, Van Rooyen, Buirski, and Ellenor, and fight of the night was awarded to the flyweight title bout between Zulu and Chipfumbu.

The official EFC 62 results are: