ENGLAND’S BAHATI CONTINUES TO GIVE SA THE FINGER 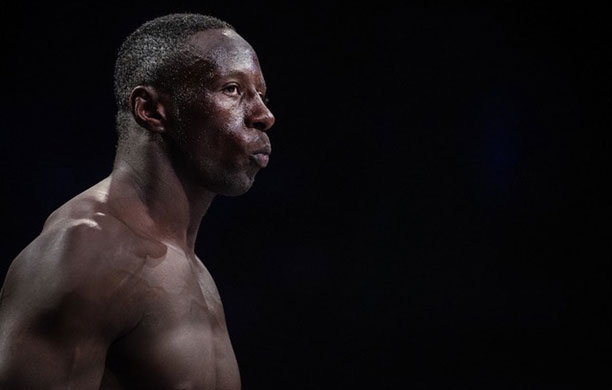 Johannesburg, South Africa – EFC middleweight champion, England’s Yannick Bahati, has made a career out of antagonising SA fans, and his antics are now spreading to SA media also.

In the build-up to his Champion vs Champion bout against EFC welterweight champion, South African Dricus Du Plessis, Bahati has now ducked two media engagements while keeping a steady stream of vile smack talk locked on to his opponent, and SA fans.

On 10 July Bahati was scheduled to appear on the MMA News Channel ‘The Clinch’ via Skype, but cancelled at the last minute. Respected sports journalist Simon Stephens was left to explain Bahati’s absence to Du Plessis, just minutes before the taping of the episode. The unfolding of that event can be seen here:

Du Plessis took the opportunity to fully analyse his opponent on air, and concluded by saying that ultimately MMA is about having courage, and Bahati just doesn’t have it, which is why he will lose.

On Tuesday August 8, Bahati was scheduled to join the Big Al Podcast, but again declined to appear at the last minute.

Du Plessis appeared on the same show and got straight into a full breakdown of his opponent:

“He tries to intimidate me with mind games, but he doesn’t understand how it’s done,” said Du Plessis. “His body language is an obvious giveaway… He doesn’t believe his own trash talk, he doesn’t believe in himself, and it shows… There is nothing in what he says or what he’s done that I find worrying.”

“Yes, he has a very strong upper body,” Du Plessis continued, “but I see that as a liability in this fight. He will want to take me down because he can’t match me standing, but he only has three takedown attempts before he gasses… Honestly, looking at his record he hasn’t qualified to fight me.”

EFC will release the EFC 62 Countdown Show on 11 August, including the only media footage Bahati has made available so far.

Bahati lands in Johannesburg on Friday, August 11, and will attend the EFC 62 media day on Saturday August 12. There he and Du Plessis will face off and answer questions live, their first public meeting in the build-up to what is arguably the biggest grudge-match in EFC history.

“He can say whatever he wants,” said Du Plessis. “Insulting South African women, suggesting I need to protect my virginity, it’s just stupid… He can fight the best fight of his life, and it still won’t be good enough.”

EFC 62: Bahati vs Du Plessis, Zulu vs Chipfumbu, Kabesa vs P. Botha is presented by www.BetXchange.com and takes place on Saturday 19 August live from Carnival City, Johannesburg, RSA. Tickets are on sale at www.computicket.com, and the 5 main card bouts will be broadcast live on kwesesports.com (Sub-Saharan Africa), Kwesé Free Sports 1 (Kenya & Rwanda) and live in South Africa on SABC 3 starting at 21:00 (CAT). Full broadcast details available on www.efcworldwide.com.