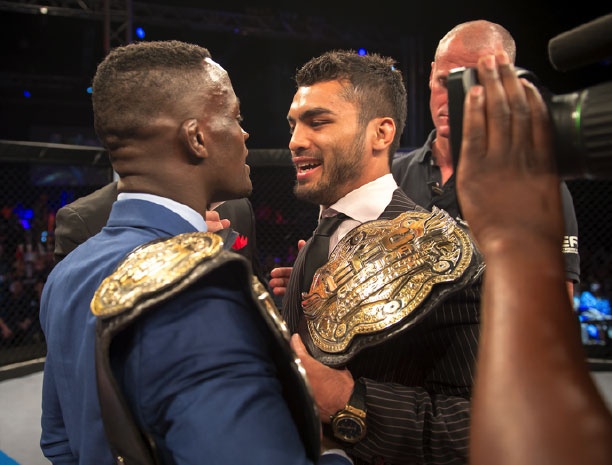 The coaches for TF1 (The Fighter, Season 1), the ground-breaking new reality show from EFC, have been revealed. Reigning bantamweight champion Demarte Pena and long-time fierce rival, interim bantamweight champion Irshaad Sayed, will be going head to head as their respective teams do battle over 10 episodes.

Sequestered in a villa in Johannesburg, South Africa, 10 of the best MMA middleweight prospects from around the world will live and train together, as well as compete against each other in a quest to win the ultimate prize – a R500,000 contract and a guaranteed shot at EFC gold.

On entering the TF1 house, the 10 contestants will be split into two teams chosen by Pena and Sayed respectively. The coaches will then not only mentor and train their athletes as the teams eliminate each other week by week, but will also face each other in the season’s grand finale.

There could be a no more bitter rivalry than that which exists between Pena and Sayed.

Previously they faced each other at EFC 55, Cape Town, in a bid to unify the EFC bantamweight championship. Pena defeated Sayed via unanimous decision, and then controversy ensued. Due to contaminated supplements causing Pena to test positive to performance enhancing substances afterward, the fight was ruled a no contest.

Sayed has been reinstated as the interim champion, and now finally gets the rematch he has been hounding both the press and EFC for.

TF1 debuts on global TV on Saturday 14 October 2017, with a new hour long episode released each week thereafter, all building up to the live grand finale on 16 December at the prestigious Times Square Sun Arena, Menlyn Maine, Pretoria.

Team Pena or Team Sayed, who you got?