CONSTANTIA INSURANCE BRINGS YOU ‘THE FIGHTER’ 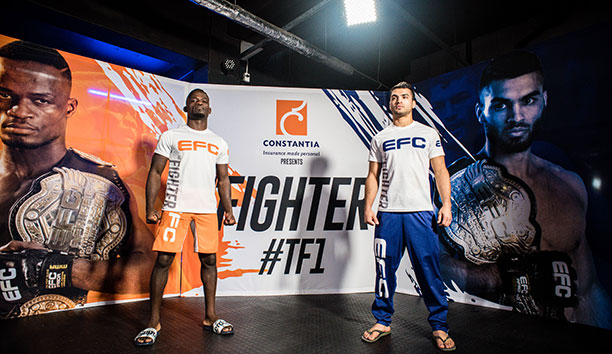 Johannesburg, South Africa – Filming for the ground-breaking mixed martial arts reality TV series ‘The Fighter’ has begun, and EFC’s chief partner for the series has been announced. Constantia Insurance, the company that has provided equally ground-breaking and comprehensive medical cover for EFC athletes take that title role.

“We are extremely proud to reveal Constantia Insurance as our headline partner,” said EFC President Cairo Howarth. “Constantia is always innovating and pushing boundaries, they have been partnered with us for several years looking after our athletes, and with TF1 we are again making history!”

“The Constantia Insurance Group is very pleased to expand its highly successful partnership with EFC, as headline partner of The Fighter,” said Constantia Insurance Group CEO Volker von Widdern. “Constantia continues its responsive and innovative underwriting style by providing accident and health cover to the contestants, and will be announcing new products that empower and add value to the consumer, because at Constantia, its ‘Insurance made Personal’.”

EFC superstars Demarte Pena (bantamweight champion) and Irshaad Sayed (interim bantamweight champion) will finally put their highly publicised feud to bed, as they take the reins as rival coaches in the series. Over the 10 episodes they will prepare their hand-picked teams to compete against each other in a series of elimination fights, and ultimately face each other in the grand finale.

The Constantia Insurance colours of orange and blue have been chosen as the official team colours for the series, with Team Pena claiming the orange kit and Team Sayed the blue.

“Constantia filled a major gap in the available cover for us when we were building up EFC, and have expanded their protection to the EFC organisation with enhanced cover to the athletes and special event related risks, both as regards to EFC and the general public attending our events,” said Howarth. “The ‘Constantia Cares’ ethos is coming through strongly for EFC, our athletes and fans.”

Contestants arrived on Monday morning to kick-off the first day of filming.
As always, Constantia Insurance has the athletes and coaches fully covered, from medical insurance right through to insuring their vehicles, as they train and fight beyond their limits in their quest for EFC gold.

Keep up to date with the action and drama by following the official hashtags:
#TF1
#WeCare