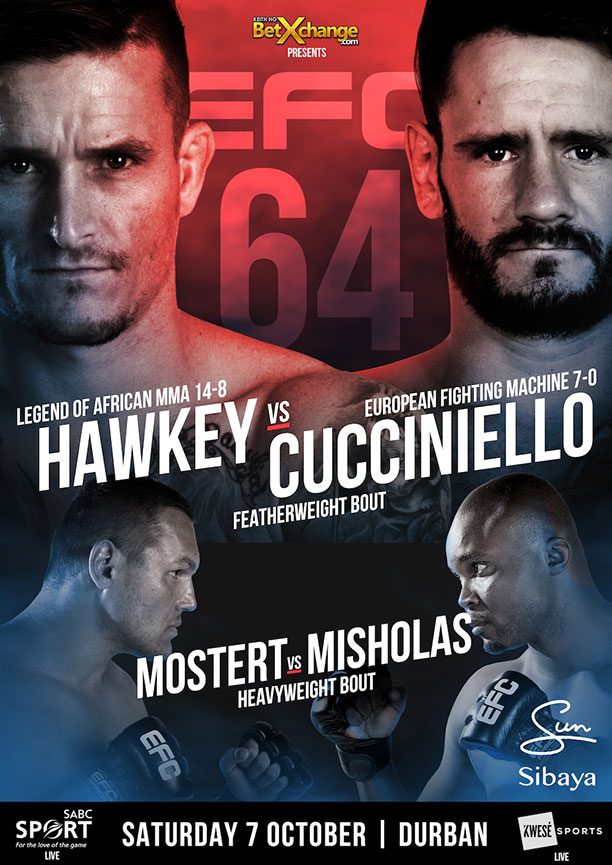 Cape Town, South Africa – The main event at EFC 64 in Durban sees local favourite and legend of African MMA, Wesley Hawkey (14-8) welcome the undefeated Englishman Jay Cucciniello (7-0) to the EFC, and in the co-main event the savage former heavyweight title contender Wessel Mostert (4-1) meets the might of Ricky ‘Apocalypse’ Misholas (5-6).

Hawkey in action against Sibusiso Mdoko

The former title contender, Wesley Hawkey carries a name synonymous with fighting and MMA. Hailing from a renowned family of martial artists, combat has been the “Young Assassin’s” world for as long as he can remember. Training with his father and brothers, it was at the age of 6 that he first stepped into a boxing ring.

One of the first wave of Durban’s elite fighters, he is a southpaw fantastic at misdirection, feints and counter-striking. His fists have proved the demise of many in the Hexagon – first round KO’s of Katz and Mdoku are his most recent scalps.

He has added a lethal wrestling and submissions arsenal to his game, with six of his 14 wins coming by submission. Against Commonwealth wrestler Hanru Botha he revealed the ability to go deep and dark into the wrestling grind, producing an unforgettable decision win.

His opponent, Jay Cucciniello’s combat journey has spanned the globe. Born in Dublin and raised in the UK, by the age of 11 he was an orphan, and at 16 he left his schooling to join the armed forces. His desire to fight led him from the battlefields of Iraq to Fuengirola, Spain, and the gym of friend and UFC veteran Luke Barnatt (Team Barnatt Gym).

Dubbed ‘The Mellow Fellow’ Cucciniello is anything but. He has carved a ruthless reputation among the fighting arenas of Europe. His perfect record is made more frightening by the fact that he has finished every opponent, 70 percent of them within the first round.

Cucciniello’s appearance in Durban is a reckoning. For Hawkey, Durban’s rich MMA legacy is at stake – one that he helped create, and continues to uphold by training the young while raising a family. For the Englishman it is legitimacy on the world stage that hangs in the balance, and validation for a journey that has taken him very far from home.

The co-main events Ricky ‘Apocalypse’ Misholas who hails from the DRC is a man as iconic as Hawkey, but from a different realm. After debuting at EFC 12, he has fought all of the organisation’s biggest men. His style is uncompromising, preferring to stick to his feet, fight with his fists, and give no ground. His bouts are bloody, brutal, and thrilling.

Set to stand across from him in the Hexagon is the daunting challenge of Wessel Mostert. Having smashed his way by first round finish through Mustard, Yamdjie, Strauss and Strydom, the heavy-set South African has proved to possess hands with true KO ability. Fresh from his only loss, against the dominant champion Andrew van Zyl, he is focused on re-claiming his right to once again fight for the belt.

For Misholas, Mostert is a reckoning. A puncher as mean and committed to toe-to-toe battle as himself, nursing an obsession to once again book a title shot, Misholas’ only defence will be relentless attack, and victory.