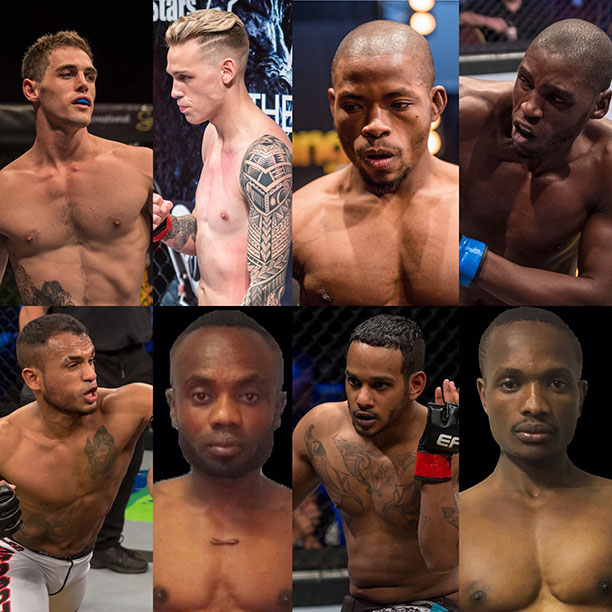 Durban, South Africa – The final four fights for the coming EFC Durban event at Sibaya Casino and Entertainment World, on 7 October, have been revealed.

Kennedy vs Smith – Lightweight
Both Durbanites, Kennedy (1-0, Smackworks MMA) and Smith (1-1, GBH), have been calling each other out for several months, petitioning EFC matchmaker Graeme Cartmell to face each other. They get their chance.

Ngcobo vs Mikixi – Lightweight
Fighting out of Durban’s Team MMA fighter, Ngcobo (1-2) had a rough start to his EFC career, but has recently stunned crowds with his first-round TKO victory at EFC 62. His opponent Tshilomba (1-0), the younger brother of notorious heavyweight Bernardo Mikixi, impressed at Sun City on his debut. The ‘Brothers in Arms’ athlete possesses an athleticism reserved for the elite.

De Vries vs Madlopha – Flyweight
Two aggressive kickboxers, ‘The Bushknife’ De Vries (0-1) and ‘Super’ Madlopha will collide. Both of these Durban based athletes promise KO finishes with lightning fast striking. De Vries fights out of the famed GBH gym, while Madlopha splits his time between his own gym, Super Warriors, and House of Tinkerbell with JP Kruger.

Moodley vs Dwama – Flyweight
A Durban favourite, Moodley (1-1) brings fast paced striking mixed with a dynamic submission game. The DRC’s Dwama makes his debut out of Fighterz Inc. in Cape Town. If he is anything like his team mate Faeez Jacobs; he will bring aggressive pressure in a hunt for the finish.

These fights are set to take place on the prelim card just ahead of the five EFC 64 main card bouts.

EFC 64 Hawkey vs Cucciniello is presented by www.BetXchange.com and takes place on Saturday 7 October live from Sibaya, Durban. Tickets are on sale soon at www.computicket.com, and the 5 main card bouts will be broadcast live on kwesesports.com (Sub-Saharan Africa), Kwesé Free Sports 1 (Kenya & Rwanda) and live in South Africa on SABC 3 starting at 21:00 (CAT). Full broadcast details available on www.efcworldwide.com.