I’M GOING TO CHEW HIM UP 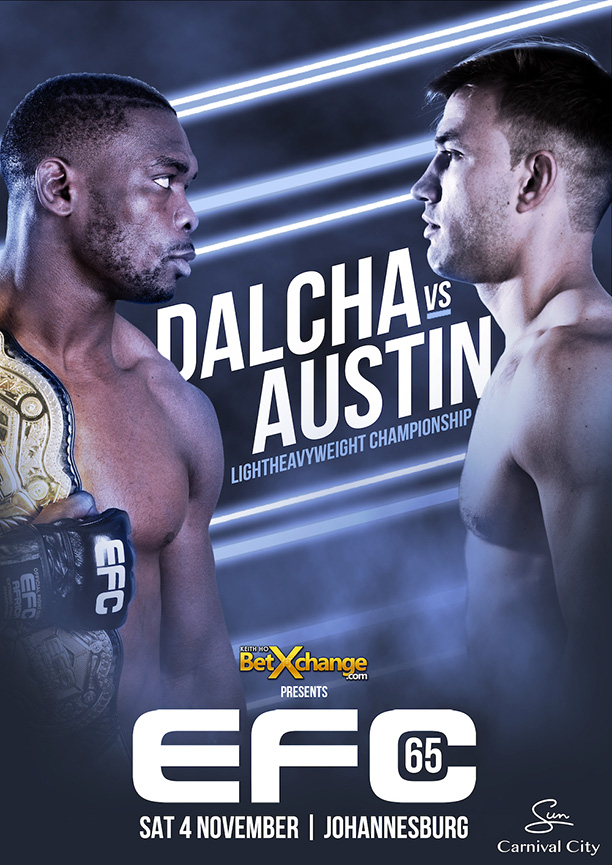 Dalcha is a frightening athlete. Incredibly powerful, he boasts world-class Judo and devastating one punch KO power. Although synonymous with massive takedowns, in his most recent championship defence it was an overhand from hell that laid his opponent, the Frenchman Alan Baudot, out. His home away from DRC, Dalcha lives in coastal city of Cape Town, South Africa and trains out of Camp Fight.

“I wasn’t impressed with Dalcha’s performance,” said Austin at the EFC 61 post event presser, an event at which they both competed, and where the seed of the coming fight was born. “He was on the ropes. To be honest, I thought he was close to getting KO’d himself. He got hurt and he swung with his eyes closed.”

“That isn’t going to happen with me,” Austin continued. “If he backs up like that I am going to chew him up. It will be an easy fight.”

Dalcha responded simply, “I’m the true champion. I am ready to face him anytime and anywhere.”

Austin made his EFC debut the same night at heavyweight against African boxing champion, Elvis Moyo. The night before the fight, Austin famously declared, “Do you think I’d give up 10 kilos against a man that can grapple? No way. Moyo can’t grapple, and that’s how I’ll easily beat him.”

Living and training in London, England out of the famed Team Titan, Austin is indeed smooth talking. A calculated assassin, a thinking man’s fighter, backed up by an impressively athletic physique. Against Moyo he showed his strategic brilliance, but how will he deal with the sheer, unrelenting brutality of Dalcha?

The Englishman will soon begin to lay out the chess pieces of this fight, while Dalcha will continue to do what he always has; refine his brutal power as he prepares to crush another opponent.

EFC 65: Dalcha vs Austin is presented by BetXchange.com and takes place on Saturday 4 November live from Carnival City, Johannesburg. Tickets are on sale soon at computicket.com, and the 5 main card bouts will be broadcast live on kwesesports.com (Sub-Saharan Africa), Kwesé Free Sports 1 (Kenya & Rwanda) and live in South Africa on SABC 3 starting at 21:00 (CAT). Full broadcast details available on efcworldwide.com.