INTENSITY PUSHED TO THE MAX 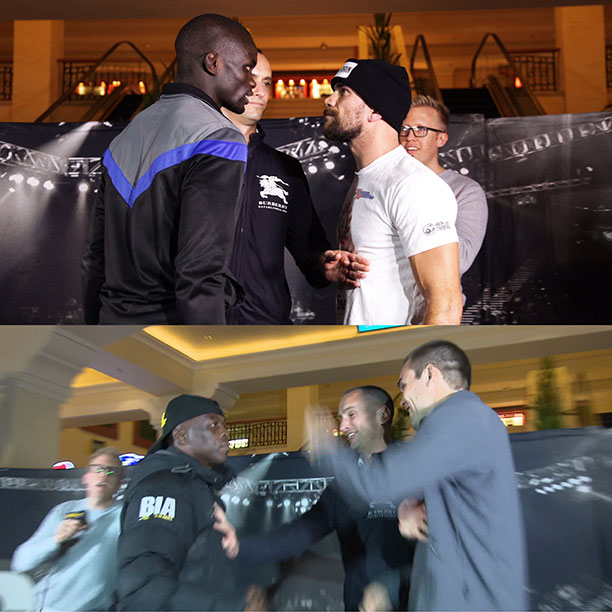 Cape Town, South Africa – Last night fans and athletes gathered in numbers at GrandWest, Cape Town for face-offs, interviews and open workouts at the EFC 63 Fight Week Fan Event, and from start to finish those in attendance were witness to the intensity of the impending battles to take place in the Hexagon.

Kicking-off proceedings, Conrad Seabi and Shaun de Lange took to the stage. Their face-off got aggressive quick, putting fists in each other’s faces and threatening with feints before being separated. See what went down between them here: https://youtu.be/Wf123iAG8eI

Big cheers were heard throughout the venue as former light heavyweight champion, Gideon Drotschie stepped on stage to answer questions and face-off with his opponent Warren Allison. Drotschie has been out of action for almost two years and has a massive challenge in his return against the submission specialist Allison.

It continued to rile up on stage when long brooding grudge match, DRC’s Bruno Mukulu and former welterweight champ, RSA’s Dino Bagattin had their turn. Bagattin surprised the crowd by calling a young fan on stage during his open workout, while Mukulu gave a demonstration of his impressive physical attributes. When it was time to face-off, Bagattin held nothing back and in a sudden change of character flipped Mukulu the bird.

South Africa’s Cameron Pritchard and Brazil’s Jose da Rocha were next. Da Rocha showed off his lightning fast and powerful Muay Thai skills, while Pritchard fielded questions from the media. Not as visibly heated, but an undercurrent tension ran between as the two elite athletes stood eye-to-eye.

When it was time for Saturday’s main event athletes, USA’s Dave Mazany and Zimbabwe’s Themba Gorimbo to hit the stage, tensions reached an all time high. When it was finally time for them to stand face-to-face, Gorimbo’s infamous intensity took the audience by storm, refusing to take his eyes off Mazany, constantly pushing forward. Gorimbo shouted, “let’s go right now.” Mazany laughed it off as he stood strong. You can watch their face-off here: https://youtu.be/byRmEFigtjI

The outcomes may not be certain, but one thing for sure is that these athletes are bringing the fire to EFC Cape Town this Saturday, don’t miss it!

EFC 63: Cape Town is presented by BetXchange.com and takes place on Saturday 9 September live from GrandWest, CPT. Tickets are on sale at www.computicket.com, and the 5 main card bouts will be broadcast live on kwesesports.com (Sub-Saharan Africa), Kwesé Free Sports 1 (Kenya & Rwanda) and live in South Africa on SABC 3 starting at 21:00 (CAT). Full broadcast details available on www.efcworldwide.com.