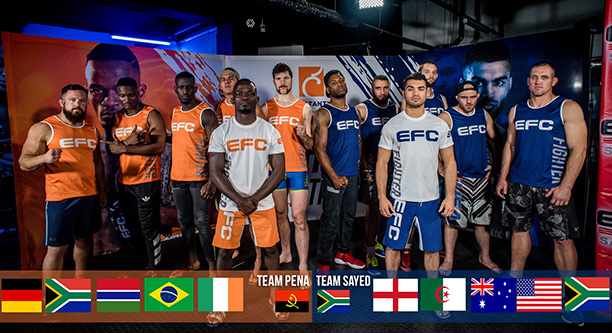 Johannesburg, South Africa – 10 of the best, undefeated middleweight prospects from around the world have been selected to live and train together, as well as compete against each other in a quest to win the ultimate prize – a six-figure contract and a guaranteed shot at EFC middleweight gold in the new mixed martial arts reality TV show, ‘TF1 – The Fighter’.

Upon entering the TF1 house (when filming began), the chosen athletes were revealed. The 10 undefeated athletes have been split into two teams chosen by coaches Pena and Sayed respectively.

For the teams to be chosen, athletes went through their first day of intense training. In a grueling selection process with drastic consequences on the line, the 10 contestants were pushed to the edge. Team selection was full of dramatic highs and lows and ultimately the fate of the contenders was set. Don’t miss the first episode of TF1 to see the first matchups made and what went down.

Ahead of the TF1 global premiere scheduled for Saturday 14 October 2017, the teams chosen by the coaches have just been disclosed, and are as follows:

Keep a look out for the athletes making their way around Johannesburg and Pretoria during filming and in the lead up to the grand finale taking place on Saturday 16 December at the prestigious Time Square Sun Arena at Menlyn Maine in Pretoria.