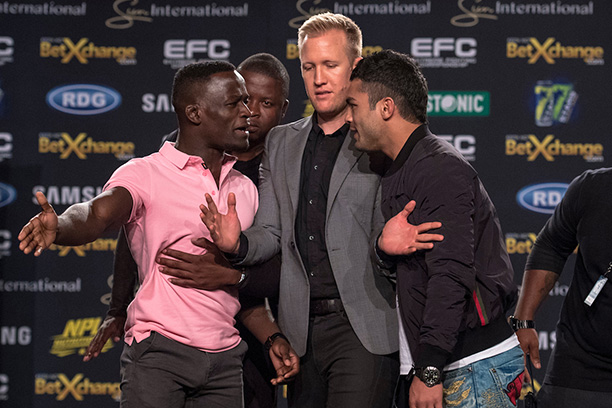 Pretoria, South Africa – Ahead of the bantamweight unification bout and the biggest rematch in EFC history, Irshaad Sayed has taken to social media to express his concern about opponent Demarte Pena.

The last time the two champions fought the decision was ultimately ruled a no-contest due to Pena testing positive for banned substances. It was also found that it was due to no fault of Pena’s, but due to contaminated supplements he was taking.

The rivalry between the two athletes has been manifesting over years and it reached a high this morning when Irshaad Sayed announced that he wants to see a clean test from Pena, before their Saturday 16 December bout.

Whether either of the athletes are scheduled for testing prior to the bout, or not is unconfirmed. Based on previous instances, it is most likely that testing throughout the entire fight card will be thorough. South African Institute of Drug Free Sports (SAIDS) conducts all testing independently of EFC.