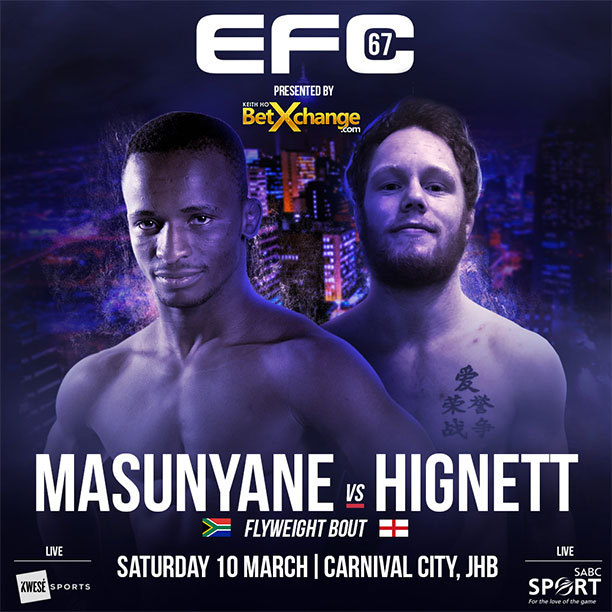 Johannesburg, South Africa – Excitement escalated as it was released that Bokang ‘Little Giant’ Masunyane would be fighting on the opening EFC card of 2018 at Carnival City on 10 March. His opponent, who had not yet been revealed, has been now. EFC fans are soon to learn of the organisation’s new threat, meet England’s Connor Hignett.

Known as the ‘Hand Grenade’ Connor Hignett is a powerful flyweight, with massive punching power. An impressive 5-2 fight record, it is his hard-hitting strikes that have set up most of his submission finishes.

Fighting out of ‘Hamma Gym’ in Liverpool, the same gym as EFC’s infamous Azi Thomas, Hignett promises a similar aggressive and raw fighting style. He has fought in some of the biggest European promotions and the big lights of the EFC Hexagon will not be a distraction for the experienced competitor.

Upon signing for the fight Hignett had a simple message for Masunyane,” Sleep well fella, don’t be having no nightmares about me just yet.”

A difficult task lies ahead of Hignett in the form of Masunyane.

Undefeated in 4 fights, he has out struck and out wrestled everyone placed in front of him. He is undoubtedly one of the most electrifying athletes in the organisation, and is now hunting his 5th straight win.

Highly unconventional, Masunyane is renowned for throwing inventive assaults on his opponents. From hand-stand head kicks to front flips, he has seemed unstoppable in every appearance.

Fighting out of FFM in Johannesburg, the local support will be out in full force cheering their favourite athlete onto victory.

A fight of the night in the making, these two warriors are out to put on a battle to be remembered for the ages.

This fight takes place on the main card just ahead of the inaugural EFC women’s strawweight between RSA’s Danella Eliasov and Italy’s Chiara Penco and the EFC featherweight championships between DRC’s Igeu Kabesa and RSA’s Boyd Allen.