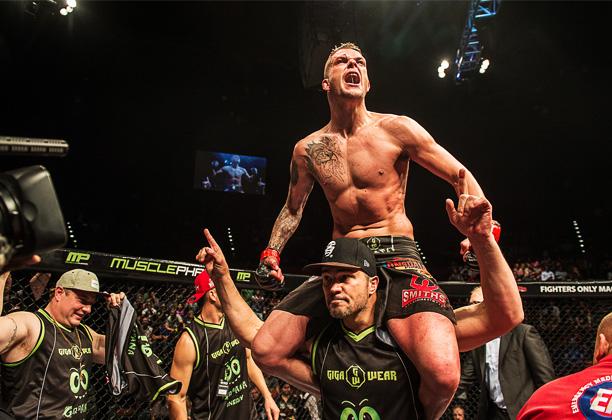 Johannesburg (South Africa) – Fight fans saw something special take place at EFC AFRICA 23 on Thursday night. Dino ‘The Lion’ Bagattin won the welterweight title in a five round bout that will be spoken of for years to come. In addition, EFC AFRICA heavyweight champion Andrew ‘One Gear’ van Zyl retained his title against kickboxing champion Sors ‘Guru’ Grobbelaar.

Heavyweight challenger Sors Grobbelaar went into his bout billed as the underdog, a label he had worn in his last four outings and proved wrong every time. On Thursday night, though, it was a bridge too far. Despite a strike flurry at the start of the second round where the ‘Guru’ rocked the champion, Van Zyl’s all round game was simply too good. He took Grobbelaar’s back and battered him into submission with ground and pound strikes.

The welterweight title bout between champion Michiel Opperman and Dino Bagattin was a scintillating display of pure MMA. Opperman attempted to take the fight to his traditional strength, the ground, on numerous occasions, but the challenger was well prepared and defended smoothly. Over five rounds Bagattin tore the champion apart, landing uncountable elbows. By the end, both were bleeding heavily and Bagattin was undoubtedly the new champion.

Boyd Allen entered his top contender featherweight fight looking for the perfect war. He had asked for the toughest opponent out there and been given MMA legend Wesley Hawkey. Allen peppered the man from Durban with a variety of strikes, followed him to the ground, and finished by guillotine submission. Allen has yet to lose a round in the Hexagon, never mind a bout.

Martin van Staden and Henry Fadipe were first scheduled to face each other at EFC AFRICA 19. Two postponements and a storm of smack talk later they finally met on EFC AFRICA 23’s main card. The saying goes that violence doesn’t lie, and Fadipe proved that. Tagging Van Staden early with a big right hand knock down, the Nigerian born Irishman continued to apply pressure, finally snagging a deep ankle lock.

Wilhelm Strauss and Vandam Mbuyi had all the hallmarks of a classic heavyweight war in its lead up. Strauss was coming off of a fight of the night performance and win, Mbuyi also on a win and calling for a bigger test. Their encounter opened with a blizzard of strikes from both, until Mbuyi landed a straight, sledgehammer right, dropping Strauss. A KO victory for Mbuyi earned him the knock out of the night award.

The other awards of the evening went to Pierre Botha for his impressive arm triangle victory over Baldwin Mdlalose, and the epic welterweight title clash between Michiel Opperman and Dino Bagattin was awarded fight of the night.